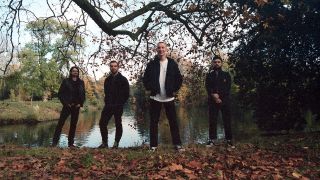 (Image credit: For The Lost)

London-based experimental proggers Asian Death Crustacean premiere their brand new video for Baikal Part II with Prog. The track is taken from the quartet's debut album Baikal, which will be released on June 26. You can watch the video in full below.

"This track had its seeds in the first material we wrote together as a band and showcases the dynamic of continuous evolution and the broad sonic palette which defines the album," the band tell Prog.

The album is named after the world's deepest lake located in the vast expanses of Siberia, the album’s title was chosen to evoke a sense of exploration into an immense and unknown space of simultaneous beauty and threat.

The band, who have toured with the likes of Three Trapped Tigers, The Physics House Band and Poly-math recorded and mixed Baikal in Sweden, working with Jens Bogren (Opeth, Between The Buried And Me) and David Castillo (Bloodbath, Leprous).