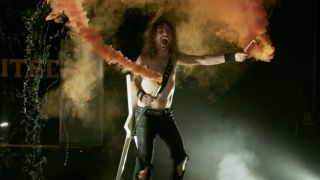 A still from Airbourne's video for Rivalry

Airbourne have released a video for their track Rivalry.

Breakin’ Outta Hell is released on September 23 via Spinefarm Records.

Created by the Dark Fable Media company, the video for Rivalry shows the band performing live in the UK and Ireland and the track is inspired by sporting clashes and the “corporate forces” that have led to a number of small live music venues closing.

Frontman Joel O’Keeffe says: “The lyric probably came from us watching Football Factory or The Firm, one of those kind of films and I think at the time there was a big grand prix race on, lots of intense rivalries being reported in the media.

“Plus, as with other songs we’ve done, there’s an aspect here of rock‘n’roll taking a stand against those corporate forces that seek to restrict our freedoms, that try to shut down the little live venues, leaving bands with nowhere to really hone their craft.”

Airbourne have a number of tour dates to come in 2016 in support of Breakin’ Outta Hell, the follow-up to 2013’s Black Dog Barking.