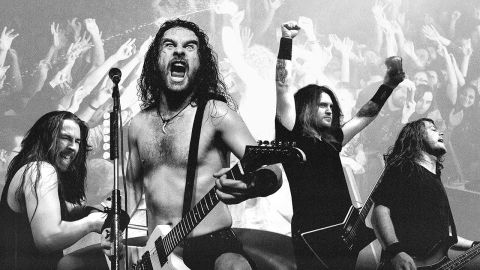 Airbourne have built their career on wrongfooting peoples’ expectations of them. With each new album comes a burning question: will they sound like AC/DC circa 1977 or AC/DC circa 1981? Or maybe they’ll just go completely crazy and shoot for AC/DC circa 1990?

Cheap shot? Yep. Is anybody complaining? Nope, especially seeing as Angus Young and co themselves are currently MIA somewhere between Melbourne and Vancouver, up to god knows what.

The more bands who can tap into and convincingly channel the Australian icons’ elemental rock’n’roll the better, especially right now. The whole world is on a highway to Hell, so we may as well have a soundtrack to match.

Boneshaker doesn’t let the side down. From its nudge-nudge title to the broken-bottle riff that ushers it all in and doesn’t let up for the next 40-odd minutes, Airbourne’s sixth album is an exercise in pure rock’n’roll class – albeit a morning-after-the-night-before, how-did-this-vomit-end-up-on-my-shoes-and-who-is-she kind of class.  Hey, no one said upper class.

Anyone coming to Boneshaker for a state-of-the-world address should move along. The closest they come to a politically charged anthem is the gonzoid This Is Our City, which is more likely to have you occupying your local boozer than Wall Street.

Poetry? Well, the Viagra-fuelled Sex To Go has fun with a “fast food = shagging” metaphor, which might be gloriously boneheaded by anyone else’s standards but is up there with TS Elliott by Airbourne’s. And if it’s intricate musical experimentation you’re after, well, that last Tool album won’t listen to itself.

No, Airbourne have given themselves one job in life, which is to strip rock’n’roll right down to its fundaments. And with Boneshaker – as unrepentantly old-school as a frayed ‘For Those About To Rock’ backpatch – they’ve done that job to perfection once again.

Airborne's new album Boneshaker is out now on CD and Vinyl via Spinefarm.

Metal Hammer has teamed up with Airbourne for a world exclusive 'Boneshaker' bundle! The bundle includes a hand-signed and numbered lyric sheet, Boneshaker patch and exclusive Airbourne magazine cover. Only 300 are available worldwide, so get yours now!