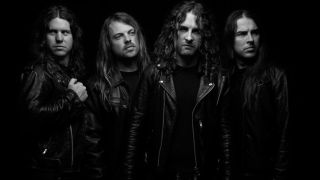 Airbourne say their upcoming fouth album Breakin’ Outta Hell was made to help people get through a “hard time.”

The Australian band also say that the follow-up to 2013’s Black Dog Barking embodies their own life motto, ‘World off, music on.’

Singer and guitarist Joel O’Keeffe told a press conference in Paris: “Breakin’ Outta Hell, it’s for everybody that’s having a hard time, or even if you’ve just had a hard week at work, or at university studying, trying to learn economics or stuff that you don’t know what the fuck is going on, and you’re, like, ‘I just wanna rock.’

“Anyone who’s having a bit of a shit day, we’ve got a saying, it’s called, ‘World off, music on.’ So that’s what it’s about. Breakin’ Outta Hell – and rock’n’roll is your one-way ticket out.”

They say their song When I Drink I Go Crazy is based on a night out they were on – during which Joel stood in the middle of the road “directing traffic like a ninja.”

His drummer brother Ryan says: “The next morning Joel comes in, he’s hungover and goes ‘I’ve got the song title for the crazy song we want. I asked, ‘What?’ and he says, ‘When I Drink I Go Crazy.’ I asked, “Do you remember what you were doing last night?‘”

Breakin’ Outta Hell will launch on September 23, while the album is available for pre-order. Airbourne launched a lyric video for the title track in July.

Airbourne announced a UK winter tour and will also support Volbeat on their European dates.