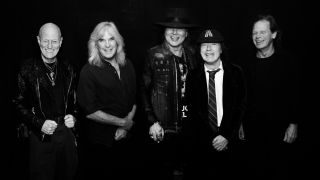 AC/DC have released a trailer for their autumn US tour with Axl Rose.

The band announced the 10 show run after the dates were postponed in March when Brian Johnson was advised by doctors to stop performing or risk total hearing loss.

Rose stepped in and joined the group for the current European concerts and will play the rescheduled shows when they begin in Greensboro, NC on August 27.

Angus Young says: “We’re all looking forward to getting out there and playing. It’s part of the whole tour – we’re going to have a real blast. We’ll probably have a few surprises, a few different songs when we do tour through America.

“The best thing about being in the band is the challenge of doing it again, getting out there and playing in front of people. Each show gets more and more exciting”

As AC/DC move forward with Rose, Johnson reported positive news from a meeting with in-ear monitor inventor Stephen Ambrose of Asius Technologies after the two connected with the help of social media.

Johnson said via Ambrose’s Facebook page: “It works. It just totally works and you can’t argue with that. I was really moved and amazed to be able to hear music again like I haven’t heard for several years now.

“I can’t wait for it to be miniaturised so I can use it in every situation from normal communication, going out to noisy restaurants, to performing live music on stage.”

AC/DC’s run of shows with Rose continue tonight (June 4) with an appearance at London’s Olympic Stadium.