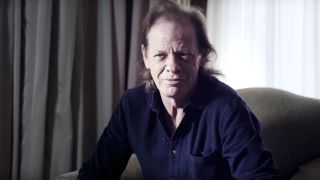 AC/DC rhythm guitarist Stevie Young has told how we works every day to ensure he’s maintaining the authenticity of his uncle Malcolm, without trying to imitate him.

Stevie, who’d stood in for Malcolm in the past, became a permanent fixture after the bandleader was forced to retire in 2014 because he was suffering from dementia.

The band are nearing completion of their Rock Or Bust world tour, with Guns N’ Roses frontman Axl Rose in place of Brian Johnson, who bowed out over serious hearing issues.

Stevie – son of Malcolm and Angus Young’s late eldest brother Stephen – says in a band video: “I work out stuff all the time. I keep working away.

“Every day I listen and try to find bits that I missed, or something that Malcolm did that would help with the tunes.”

He adds: “I’m not trying to imitate or copy him – but trying to keep the spirit of what he did in the band.”

Discussing his approach to an AC/DC show, he says: “People come out for a good time, and if you can give them a good time, they’re happy people.”

In the same video, guitar tech Greg Howard says Stevie “plays harder than anyone I’ve ever worked for.”

He continues: “In just one song he reduces a pick to almost half the size. He goes through 30, 35 picks a show. I’ve worked with artists where I hand them a pick at the beginning of the show and they hand it back to me at the end. So, Stevie’s an animal.”

AC/DC complete their touring commitments with Rose in North American during August and September. The future of the band remains unconfirmed – although Angus Young recently said he had no immediate plans to retire.