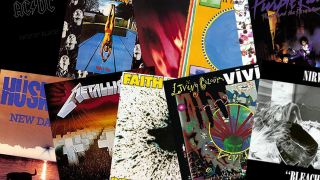 We over at Louder recently ran a series that dissected what, for our money, made up the very best albums of the 80s. From Back In Black kicking the decade off in style, to prog going pop, pop going rock, Kiss baring their faces to the world, alt-rock taking its stronghold on the charts and glam metal taking its last gasp, nary a stone was left unturned as we ran through the albums we believe made the decade one of rock music's greats.

But now we want to hear from you. What were the albums that defined your 80s? Perhaps one of Springsteen’s four studio albums soundtracked those all-important formative years; maybe it was Iron Maiden that was floating your boat – and believe us when we say there's plenty of that to choose from below.

Whatever it was, our long-list – all 200 albums strong – is below, but in the event we've forgotten one of your all time greats, there's also a field for you to fill in with your own suggestions of what should be worthy of a place. Check out our more in-depth coverage below.