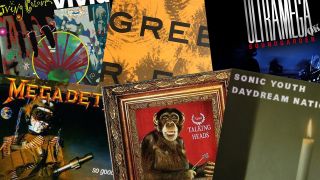 1987 is widely lauded as the 'best year in rock', (hell, Classic Rock devoted an entire issue to it), but the year that followed was no slouch, either. It was the year Talking Heads bowed out; alt.country was born; R.E.M. hit the mainstream; and – shock horror – those thrash metal reprobates Slayer slowed down.

This dark, atmospheric gothic opera is treasured by BÖC fans for two main reasons: it’s very hard to get hold of, and it’s fantastic. The brainchild of BÖC’s Al Bouchard and Sandy Pearlman, it’s an interconnected song-cycle that was six years in the making. The original members all feature, as does an all-star supporting cast that includes Joe Satriani, Robbie Krieger and Aldo Nova. BÖC certainly went out with a bang with this one. The intellectual’s very heavy metal.

By the time Bon Jovi had put together New Jersey, the band had mastered hard pop-cum-rock. The follow-up to their huger than huge 1986 album Slippery When Wet, New Jersey sees Bon Jovi following in Bruce Springsteen’s footsteps artistically. It’s a high-water mark for epic, anthemic pop-rock, with big-chorus belters such as Bad Medicine and Lay Your Hands On Me. The album cemented the band’s stadium-filling, chart-topping status impressively, and Jon Bon Jovi’s rock god status.

The marriage of Dan Stuart’s sardonic bar-room drawl and Chuck Prophet’s sensational guitar work sounds like a brutal take on Exile On Main Street: country, blues and rock meet up and get too drunk to speak. The band marinated themselves in the Memphis music scene to garner all they could from past masters to get the right sound. A few releases later, it was all over: Prophet went on to big solo things, Stuart to an institution – but alternative country was born.

Seventh Son Of A Seventh Son, Maiden’s eighth album, has eight tracks. Oh well. Confusing numerology aside, this is a metal masterpiece rated by many as the band’s best. An expansive concept piece with consistently high-quality songs, it spawned no fewer than four Top 10 hits and was a UK No.1. However, many of the band’s fans consider it to be Iron Maiden’s last great album, partly due to the fact that it was their last before guitarist Adrian Smith left.

Art-rock mayflies Jane’s Addiction followed up on the promise shown by their self-titled debut, and realised it in spades on this, their first major-label release. It’s an abrasive-sounding avant-garde blend of punk, funk and hard rock, and a landmark alternative rock record.

There’s no avoiding it: this sounds just too much like Led Zeppelin. So much so in fact, that on its release it prompted either intense excitement or complete derision. It didn’t help when they claimed – ludicrously – never to listened to Zeppelin. But with hard drums, hammer riffs and stratospheric vocals, it’s worth seeking out.

King’s X - Out Of The Silent Planet

This Texan trio make the noise of 30 on this debut. Dense, string-rattling riffs combine with inventive harmonies, intricate picking and Doug Pinnick’s bluesy holler to make this record sound very big indeed. Don’t let some mystic hokum put you off; this is a surprisingly melodic record, and Goldilox must have been a gigantic crossover hit in at least one parallel universe.

At a time when rock was increasingly looking beyond its own frontiers for inspiration, Vivid was a genre-mashing stake in the ground, taking in hard rock, modern jazz, funk and soul and more and binding them together with an incisive political spirit. Blistering opener Cult Of Personality is an powerful and eloquent statement of intent, and this is a seminal album.

Substance abuse, line-up changes, jealousy and bitterness: all standard issue rock’n’roll difficulties which dogged the making of this album. But these and other problems were channelled into a furious thrash onslaught, and Into The Lungs Of Hell, Set The World Afire and In My Darkest Hour are among the best tracks Megadeth ever recorded.

Metallica - …And Justice For All

Metal’s set-text album was both a rebirth following the death of bassist Cliff Burton, and the closing chapter of Metallica’s development to this point. The album is shot through with sadness and anger, but the scale of its technical ambition makes it exceptional: complex structures, unsettling tempo changes, and wave after wave of churning asymmetric riffs that set new records for rapid metal.

As the record that invented Nirvana and set the template for 90s alternative rock, it’s difficult to overstate Surfer Rosa’s impact. But while Pixies acolytes may have mastered its swampy rhythms and quiet-LOUD dynamics, there’s an intoxicating alchemy at work here that defies imitation. Bone Machine has it all: insane lyrics, bravura guitars and Kim Deal’s sultry drawl.

As the title suggests, Robert Plant’s fourth solo album is both forward- and backward-looking The legendary vocalist surrounded himself with a new band of young but very capable musicians, collaborated for the first time with Phil Johnstone, whose keyboards lend the record a glossy sheen, while a certain Jimmy Page plays guitar on the singles Heaven Knows and Tall, Cool One.

The Pursuit Of Happiness - Love Junk

The Pursuit Of Happiness were power-pop masters from Toronto, and Love Junk is their joyous, vibrant and very funny masterpiece. The standout track is I’m An Adult Now, in which Moe Berg laments the end of his youthful glory days, and vows to stop taking illicit drugs because he’d ’sure look like a fool dead in a ditch somewhere like some cheese-eating high-school boy’. Ballsy, intelligent, hook-laden bubblegum pop that is best listened to very loud.

This first-rate concept album tells the story of a genius, a junkie and a street girl and their alienation from 80s society. Layered guitars, operatic vocals and Michael Kamen’s orchestrations lend the whole thing a grand, epic feel, but this is a rare beast: an 80s metal album that puts the song – or, more specifically, the story – first and lets everything else take a back seat.

Green was a watershed in R.E.M.’s career. It began their transition from critically acclaimed college group to critically acclaimed huge arena band, and it’s not difficult to see why. Pop Song 89, Get Up and Stand are all radio-friendly gems, but it’s in Green’s more reflective moments – You Are The Everything, Hairshirt, The Wrong Child – where the band really show their class.

Listening to Skyscraper in 2018 might make you misty-eyed for the days when rock was irony-free and larger-than-life showmen like Dave Lee Roth were heroes rather than figures of fun. It also reminds you just how good an album this was and still is. DLR is backed by a supergroup that includes guitarist/co-producer Steve Vai, bassist Billy Sheehan and drummer Greg Bissonnette, and among some class tracks one of the highlights is the soaring, synth-drenched pop of Just Like Paradise.

Deciding (probably wisely) not to try to top the extremities of their 1986 speed metal classic Reign In Blood, Slayer instead reined back the beats-per-minute rate (but not a lot). The highlight of the results is the title track. It’s not all pipe-and-slippers though; Silent Scream and Ghosts Of War are Slayer as fast and ferocious as ever.

Sonically raw, emotionally fragile and effortlessly experimental, this is an essential double album to which underground bands from both sides of the Atlantic owe a serious debt. All of Sonic Youth’s albums made it into the Top 100, and the band became a cult favourite. The last of the noise pioneers’ three ground-breaking independent albums released in the 80s, this one saw them make a commercial breakthrough of sorts with Teen Age Riot, but this is still a long way from being mainstream.

Soundgarden’s Ultramega OK wasn’t the first grunge album, but it was among the most pivotal. Such semi-forgotten north-west frontiersmen as Skin Yard and Green River may have beaten them to the record store racks, but it was Soundgarden’s debut that first had major label eyes swivelling Seattlewards. Its slo-mo merging of punk and metal passed so quickly into the musical lexicon that it’s easy to forget just how revolutionary it was at the time. As a document of a musical sea change, Ultramega OK is indispensable.

The Heads’ swansong anticipates David Byrne’s solo output by masterfully blending their trademark angular funk with hip-swaying Latin flavours. The album is a dazzling production, with an international band of players including Kirsty MacColl, Johnny Marr and Angel Fernandez. At turns danceable and thought-provoking, it’s an underrated classic. Standout tracks are Infectious opener Blind and the chilling Facts Of Life. Quite simply an essential album.