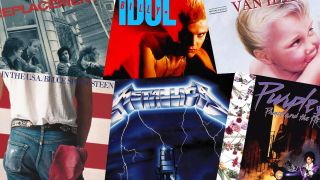 In 1984, big brother wasn’t watching after all – no, he was down the front, punching the air to the likes of Prince, Van Halen and Bruce Springsteen. 1984 was a year where rock's boundaries continued to morph and widen, meaning that the heavy metal stalwarts who had dominated the decade's earliest years started to give way to increasingly diverse alternative acts. New wave and goth became the mainstream, while thrash metal took up its MTV reign.

Shedding their new wave skin to cash in on the MTV video boom, Boston’s The Cars had the brainwave of hiring Def Leppard and AC/DC producer Robert John ‘Mutt’ Lange to make them sparkle. It generated five singles, including the career-transforming Drive.

Dio - The Last In Line

How do you follow a debut album as revered as the previous year’s Holy Diver? Ronnie James Dio’s answer was simply to deliver more of the same; the identical players and producer (RJD himself), the same ornately sculptured slabs of sound... We Rock, The Last In Line, One Night In The City, Evil Eyes, Mystery and the epic finale of Egypt (The Chains Are On). Masterful stuff.

Putting aside an ill-concealed personal disharmony, vocalist Don Dokken and guitarist George Lynch nevertheless crafted a string of classy, hook-laden melodic hard rock albums throughout the 80s. Dokken wasn’t a great vocalist but had bucketsful of charisma, Lynch’s flashy playing style enlivening material like Just Got Lucky, When Heaven Comes Down and Into The Fire that might merely have been above average in lesser hands.

For their fourth album, the Bunnymen went big. But not big in a chest-beating, heart-on-their-sleeves U2 kinda way: Ocean Rain saw them backed by an orchestra and producing some of the grandest sounding music they’d ever made. To fans, the b-side of this album (the last four songs to those of you with the CD) is one of the 80s’ most perfect sides of vinyl. Class.

Bob Ezrin had much to do with the quality of Hanoi Rocks’ fifth studio album and major label debut. Besides making it sound great, the former Alice Cooper/Kiss producer co-wrote many of its songs and called Ian Hunter to help out with the lyrics. A buoyant cover of Creedence Clearwater Revival’s Up Around The Bend is the album’s standout.

The most successful of all the ex-members of The Eagles. Accomplished and mature, hit single The Boys Of Summer establishes the record’s gravity, while the cream of rock sessioneers (Lukather/ Kortchmar/Palladino), keep it slick but never soulless.

With a sneer the size of the Grand Canyon and a talented guitar sidekick that any heavy metal band would have sold its Stonehenge monument for, Billy Idol’s second solo album was his catchiest, slickest-produced and most irrepressible work before or since. If the title track was typical, arrogant Idol, the likes of Eyes Without A Face and Flesh For Fantasy confirmed the reasons for the singer’s self-belief.

Some still cite Powerslave as Maiden’s best album, an inspection of the track-listing adding credence to this theory. Aces High and 2 Minutes To Midnight easily catered for those that liked their metal to be succinct and razor-sharp, while bassist Steve Harris’ almost 14-minute adaptation of Samuel Taylor Coleridge’s poem The Rime Of The Ancient Mariner sounded stunning in living rooms and on the concert stage.

Judas Priest - Defenders Of The Faith

It’s easy to understand why this was the album that made Priest stars in America. Its songs robust and stirringly performed, guitarists Glenn Tipton and KK Downing cause sparks from the off, Rob Halford’s vocal performance at times frighteningly good - check out his locomotive-fast turn of phrase that begins with “Look before you leap...” in Freewheel Burning. Jawbreaker and Eat Me Alive were icing on the cake.

Remember when Prince Rogers Nelson was still more famous for making music than changing his name to a symbol or suing his record company? If so, Purple Rain will most likely be responsible. A momentous collision of funk and psychedelic pop, sometimes laced with hard rock guitar, the album shifted 13 million copies Stateside.

Ratt - Out Of The Cellar

Home of the Los Angeles hair-metal band’s best-known song, Round And Round, and also for featuring David Coverdale’s one-time wife, Tawny Kitaen, on its cover, Out Of The Cellar remains an underrated record. Rarely had chorus-charged pop and sleazy metal been so successfully intertwined, and in Warren DeMartini, Ratt had a guitarist of enviable quality. Wanted Man, You’re In Trouble, Lack of Communication; all still sound great.

The Replacements - Let It Be

The first great album from The Replacements, a Minneapolis band who spanned punk, jangle-guitar power pop and alternative rock, also belatedly donating bassist Tommy Stinson to Guns N’ Roses. Let It Be was beautifully diverse, without being clever-clever. Androgynous tipped its hat at The Kinks, the much-covered Sixteen Blue was charged with teenaged naïveté, and for reasons best known to themselves, the band also covered Kiss’ Black Diamond.

For their second album, R.E.M. continued to paint from the same jangly, intelligent palette that had informed their debut. But this time around, the songs were even stronger, and Michael Stipe was finding his voice as a lyricist. Standout tracks include the insidiously catchy (Don’t Go Back To) Rockville and beautiful So. Central Rain (I’m Sorry).

The Scorpions - Love At First Sting

If, as guitarist Rudolf Schenker once told Classic Rock, the Scorpions taught the fledging Bon Jovi everything they know, Love At First Sting was a priceless lesson in potty training. From the skilfully clichéd Rock You Like A Hurricane, Big City Nights and Bad Boys Running Wild to one of rock’s finest ballads, Still Loving You, this is an album that scarcely puts a foot wrong.

Bruce Springsteen - Born In The USA

Springsteen’s seventh studio album generated as many singles, Dancing In The Dark, Cover Me and I’m On Fire among them. But for all the album’s overall quality, the deceptively uplifting title track’s tale of a shafted Vietnam veteran is the one that most people recognise. Despite the grim subject matter of some of its songs, Born In The USA made Springsteen arguably the biggest musical star of 1984.

Despite selling six million copies of their hit-infested third album, Twisted Sister re-recorded Stay Hungry as Still Hungry in the album’s 20th anniversary year of 2004. Slamming Tom Werman’s original production as “unlistenable”, few – including the band – had complained at the time. Indeed, We’re Not Gonna Take It and I Wanna Rock made Snider’s colourful troupe enormous MTV stars.

As David Lee Roth is fond of pointing out, he flounced out of Van Halen at the band’s commercial peak. Artistically, too, 1984 reversed a worrying trend of inconstancy. To differing extents, the single Jump and I’ll Wait introduced keyboards to the mix, but Panama, Hot For Teacher and House Of Pain rocked with inevitable bravado and humour. Shame that 1984 was just 33 minutes long!

Appreciation of Roger Waters’ first post-Floyd solo album was as simple or complex as the listener wanted to make it. Having hauled in Eric Clapton, percussion icon Ray Cooper, saxophonist David Samborn, arranger Michael Kamen the National Philharmonic Orchestra and (ulp!) actor Jack Palance, the record’s concept can be peeled open like an onion, revealing many layers, or simply enjoyed for its myriad musical strengths.