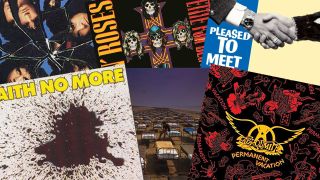 It was the year of second chances as Aerosmith, Fleetwood Mac and Heart make themselves known to the MTV Generation, while REM and U2 broke big. We round up the 20 best albums to come from 1987.

Proof positive that second time’s a charm, Aerosmith rose like a phoenix from the flames after their 70s drug hell with the classy rock swagger of Permanent Vacation. Re-invigorated by their collaboration with rappers Run DMC, Steven Tyler and his boys show they had a lot more to offer with this collection of sublime pop-metal, including the defiantly cheeky Dude (Looks Like A Lady).

Anthrax - Among The Living

Adding their own special je ne sais quois to the thrash genre, this New York quintet threw in elements of punk and a sense of humour. The standout tracks include the brutal thrash classic Caught In A Mosh, and their crossover hit I Am The Law, a song recorded in tribute to 2000AD magazine’s lawman Judge Dredd.

Shrugging off the shackles of their goth past, The Cult continue the rock theme they started on 1985’s Love album and crank it up a notch. Guitarist Billy Duffy turns in the crunchy psuedo AC/DC riffery while Ian Astbury wails for his life on L’il Devil, Love Removal Machine, and a possibly ill-advised cover of Steppenwolf’s Born To Be Wild.

Released as the CD format was seriously taking hold, this hi-tech, crystal clear, hour-long epic catapulted Def Leppard into the stratosphere. Mutt Lange’s superb production and the Lep’s anthemic choruses were a winning combination. The tongue-in-cheek Pour Some Sugar On Me was the first hit, but they followed it up with no less than six other chart singles including Animal, Women, Armageddon It and the twisted ballad Love Bites. Hysteria continues to sell well, and was awarded Diamond status in the US.

Faith No More - Introduce Yourself

Making their major-label debut, Faith No More stamped their brand of funk rock firmly on an unsuspecting audience. Although it’s the last record to feature the vocal talents of Chuck Mosley’s vocals, you can hear where the FNM sound is heading with Big Jim Martin’s guitar pushed firmly to the fore.

Fleetwood Mac - Tango In The Night

After a lacklustre beginning to the decade, Fleetwood Mac finally capitalised upon the video age and released their most polished pop rock album since Rumours. With a glossy AOR sheen overlying Lindsey Buckingham’s brilliant songwriting, the Mac were finally ready for MTV – you couldn’t switch on the telly without seeing the promo clips for Little Lies, Everywhere and Seven Wonders. Buckingham would split shortly after the album’s release.

It’s damn near impossible to adequately explain the impact of GN’R’s studio debut. It was like nothing we’d heard before – the sound of a street smart LA gang with a tortured genius of a frontman and a brand new guitar hero with a penchant for top hats. From the ominous opening growl of Welcome To The Jungle to the relentless closer Rocket Queen, Appetite runs the gamut from heartfelt balladry (Sweet Child O’ Mine) to full-on anthems for a new rock world in Paradise City and Mr Brownstone. We just didn’t know what hit us.

After their 1985 US rebirth as AOR superstars, Heart finally made their UK singles chart breakthrough with the monster power ballad Alone. Produced by Ron Nevison, Bad Animals contains this and nine other superb examples of slick, radio rock (from the blistering title track to the epic Wait For An Answer), all enhanced by Ann Wilson’s outstanding vocals.

Apart from capitalising upon frontman Michael Hutchence’s good looks, INXS’s global smash album skilfully combined every nuance of polished rock – from the relentless catchiness of New Sensation and Devil Inside to the poetry of Mediate, to the funk of Mystify and the epic balladry of Never Tear Us Apart – it impresses at every turn.

Still staying away from their Max Factor, the unmasked Kiss (bereft of Ace Frehley) delivered eleven tracks of feel-good, chant-along rawk’n’roll. Crazy Crazy Nights would give them the smash hit they needed (and a UK Top 10 single), while the anthemic ballad Reason To Live (co-written with hitmeister Desmond Child) gave Paul Stanley the chance to stretch his vocal cords.

The last Marillion album to feature Fish as their vocalist is perhaps their most underrated record. Incommunicado was the biggest single the album contained, but Sugar Mice was the superior song. Clutching… is Misplaced Childhood all grown up.

Adding extra textures (lap steel, mandolin) to his already intricate sonic palette, John Mellencamp continues to chronicle the American midwest in the manner that he began on 1985’s Scarecrow. The sometimes heavy political rhetoric is tempered by the light-hearted Rooty Toot Toot.

Debauched, dysfunctional and downright dirty – all the things we love about da Crüe are present and correct here. From the raunchy swagger of the title track to the evocation of the Sunset Strip in Wild Side, they do sleaze better than anybody else, before or since.

Many people thought that Pink Floyd would be unable to survive without their erstwhile visionary Roger Waters. They were wrong, as the Floyd’s first post-Waters album proves. David Gilmour stepped into the breach and delivered a record that lived up to the Floyd name, what with its atmospheric instrumentals, twisted lyricism and sparse arrangements.

With their last release for the independent IRS label, R.E.M. kick things off with their rockiest song to date (Finest Worksong). Document highlights all that is good about this most intelligent of rock bands. From the eclectic stream of consciousness lyricism of It’s The End Of The World As We Know It (And I Feel Fine) to REM’s first bona fide love song The One I Love, the band illustrate exactly how they would be such a force to be reckoned with in the following decade. Awesome stuff.

The Replacements - Pleased To Meet Me

A more polished sound from Paul Westerberg’s merry band of reprobates this time around, and their first album as a trio (guitarist and founder Bob Stinson left after 1985’s Tim). Pleased To Meet Me contains Alex Chilton, Westerberg’s tribute to the Big Star vocalist and his musical hero, and the delicate ballad Skyway shows the band’s new found maturity.

12 songs, 12 different emotions, all tied together by one theme – the sad demise of the Boss’s marriage. A far more reflective album than Bruce’s Born In The USA set of ‘85, this is a beautiful work of art, and Tougher Than The Rest is one of the most elegant love songs ever committed to tape.

U2 - The Joshua Tree

With Daniel Lanois in the producer’s chair, U2 finally made good on their earlier promise and broke through to mainstream success. The Edge’s distinctive guitar playing fuels the hypnotic Pride (In The Name Of Love) and the anthemic I Still Haven’t Found What I’m Looking For, while Bono’s passionate reading of the lovelorn With Or Without You and the relentless Bullet The Blue Sky shows a band at the very top of their game.

Was it a deliberate move, or just a fluke that the estranged Pink Floyd bassist/vocalist released his solo album the same year as his former band returned to work? Waters’ release is another concept album, using his trademark dark lyrical themes (this time condemning Thatcherite times and values) as seen through the eyes of a young, disabled anti-hero.

It’s Whitesnake Jim, but not as we knew ‘em. With David Coverdale giving his old ‘Snake chums their marching orders, he teamed up with more MTV-friendly faces and recorded the mighty 1987. Chock full of hit singles – Here I Go Again, Is This Love, Crying In The Rain – it took the US (and world) by storm. Its success was helped by the appearance of David’s impossibly glamorous then-wife Tawny Kitaen in the accompanying video clips.