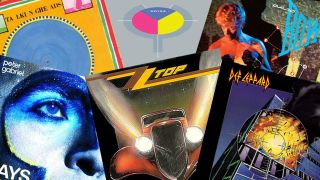 Any which way you slice it, 1983 was a big year for rock music. It was the year that saw the last Waters/Gilmour Pink Floyd album, Def Leppard dominating the US chart, and Kiss finally finding their make-up remover. David Bowie got his groove back, The Police bolstered their rock'n'roll credentials and Talking Heads made their mark on the New York punk scene. All in all, it was the year that saw the creation of some of the best, most innovative and interesting albums the decade would produce.

AC/DC - Flick Of The Switch

Admirable though it was, previous album For Those About To Rock had somewhat stymied the band’s progress. Here AC/DC went back to basics and produced themselves for the first time. It was bruising riffs all the way, through the likes of the awesome Bedlam In Belgium, but no hits. A dimmer …Switch, if you will.

Ex-Skids guitarist Stuart Adamson’s new band at times sounded like a Scottish Thin Lizzy. A unique guitar sound (‘bagpipe guitars,’ scoffed the critics), some of the best rock drumming in years, and a collection of rousing and epic songs (like singles In A Big Country and Fields Of Fire) made the band contenders alongside U2 and Simple Minds.

Four years on from the grating prog-meets-New-Romantic-ism of Scary Monsters, an altogether groovier Bowie appeared. Bronze and blond replaced the late-70s cocaine pallor, and a new sound melded Stevie Ray Vaughan’s exquisite blues guitar with a brassy dance-rock sound. Let’s Dance was quite possibly Bowie’s last great album, certainly for the next 10 years.

The one that cracked America for the Sheffield-based metallers, with new guitarist Phil Collen adding a brighter element to the band’s songwriting. Touring the US in Union Jack outfits was a gimmick that paid off, certainly with the then fledgling MTV.

A suspicious UK, fired by critics’ cynicism in various music publications, vented their spleen when the band finally ventured over here. It wasn’t an overly spontaneous sound, but the performances were energetic.

Best known as the Rainbow singer who left the band before they cracked the charts, and the man who replaced Ozzy in Sabbath, rock singer par excellence Ronnie James Dio kicked off his solo career in style with the third classic album he’d sung on. Up there with Rising and Heaven And Hell in terms of hard-rock quality. Recommendation enough for ya?

Prior to 1986’s ground-breaking So, Gabriel’s solo career had slowly moved him away from Genesis’s intricate prog rock, towards world themes and experimentation.

This sprawling double live set put all the music from his first four releases into perspective, from the gentle pop of Solsbury Hill to the explosive Shock The Monkey. Some would argue that he’s never sounded better.

After 1981’s Escape, Journey had established themselves as the undisputed kings of AOR. The excellent Frontiers saw the band expand the sound: the rockers were heavier, the ballads more emotive. Journey were massive in the US, and Frontiers even reached No.6 in the UK. The album also gave the band four Top 40 hits. However, their refusal to tour the UK would ultimately kill off that rarest of things: a UK AOR audience.

Kiss - Lick It Up

Desperately searching for something to revive their flagging fortunes after the hits had dried up and the original line-up had splintered, Kiss eventually returned to the unused concept of 1980’s Unmasked, and ditched the make-up. The result was that they were back in the charts here and in America in a big way.

Marillion - Script For A Jester’s Tear

Prog rock was hardly anything new in 1983, and Marillion – being too reminiscent of Genesis – didn’t offer a particularly new sound. But for a new young audience weaned on older siblings’ record collections, that didn’t matter, and prog rock managed to weave its way into the headbangers’ psyche. Script…, the band’s debut album, was the major player in the field at the time.

Mötley Crüe - Shout At The Devil

1983 was the year that these four reprobates from Sunset Strip really popped their spiky heads above the parapet as far as the UK was concerned. Shout At The Devil displays Mötley Crüe’s sleazy metal at its best. Admittedly it would be another two years before they would bother the UK charts, but the likes of the title track, Too Young To Fall In Love and Looks That Kill from this second album wowed the fledgling glam metal crowd.

Ozzy Osbourne - Bark At The Moon

Enlisting the talents of Ratt/Rough Cutt guitarist Jake E Lee after the tragic loss of Randy Rhoads, everything seemed back on track in the land of Oz – or at last as much as it ever could be.

Thanks to the werewolf-themed video for the title track, and the ballad So Tired, this album, along with Diary Of A Madman, remains Ozzy’s most successful record.

Ostensibly a solo album from Roger Waters (keyboard player Rick Wright had been sacked three years previously, and drummer Nick Mason and guitarist David Gilmour only had sporadic involvement). It was based on Waters’s anger at the Falkland’s conflict, and his own fear of nuclear war – themes that set him directly at odds with Gilmour. This album was the last time Waters was involved with Pink Floyd in the studio.

Robert Plant - The Principle Of Moments

Plant’s second solo excursion after 1980’s Pictures At Eleven once again had Phil Collins on drums, and again put Plant in the Top 10 in both the UK and US.

However, there was a more laid-back feel to the sound on this record, which had moved away from the pounding modern rock of his debut. Hit single Big Log typified his new approach.

The Police were a massive pop phenomenon worldwide, despite including two ex-prog rockers in Andy Summers (Kevin Ayers) and Stewart Copeland (Curved Air). Synchronicity was the album that made people realise what a mainstream rock phenomenon The Police were. Chock-full of hits, of which King Of Pain and Synchronicity II are the best. Sadly their last album.

In 1983 R.E.M. were still a US college rock phenomenon, the domain of students the country over. Indeed it would be another five years before the UK mainstream would even take notice of the band. Those who did discover the proto-Americana rock of R.E.M.’s debut (via tracks such as the delightful Radio Free Europe), knew they were on to something very special.

Released some nine years after the band had come together at art college on Rhode Island, Speaking In Tongues gave funky New York punks Talking Heads their first big US breakthrough, with the pulsating Burning Down The House. The tour for the album was captured by director Jonathan Demme in the film Stop Making Sense.

It may be only eight tracks, but in the early 80s mini-LPs were all the rage. Yet on the back of U2’s breakthrough album War, Under A Blood Red Sky and the accompanying live video from Colorado’s Red Rocks captured the anthemic power of the young U2 superbly. On the scintillating The Electric Co. the band rocked harder than some people thought they ever had.

His career cut short when he tragically died in a helicopter crash in 1990, Vaughan had made his solo debut just seven years earlier with Texas Flood. A massive US hit – in fact it was the most popular blues album for 20 years at the time of its release – it showcased eloquently the exquisite feel and touch of the guitarist who blues legend Albert King called the Godfather.

Three years earlier Yes were in disarray, utilising the services of The Buggles on Drama. Now, with one-time Buggle Trevor Horn in charge of production, and Trevor Rabin bringing some much-needed grit on guitar and clarity to the songwriting, Yes took the rest of the 80s by storm, aided by this album’s hit Owner Of A Lonely Heart.

ZZ Top were already an immensely popular Texan blues trio. But when in 1993 Eliminator roared up the road and parked in the charts the trio and the album took the 80s by the scruff of the neck, helped in no small part by a series of superb, truly memorable, MTV-friendly videos and some daftly successful singles, including Gimme All Your Lovin’ and Sharp Dressed Man.

Infectious, humourous, and way more successful than any record by men with facial hair should be, Eliminator remains ZZ Top’s commercial peak.