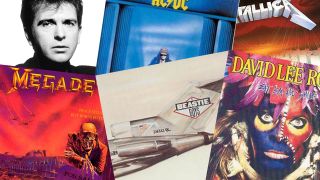 As 1986 rolled round, the rock world was turned on its head. There was a new singer for Van Halen; AC/DC went soundtrack-tastic; rap-rock roared into view for the very first time with the advent of Beastie Boys and Genesis and Peter Gabriel went head-to-head in the battle for pop superstardom. Three of the big four furthered their mission to take thrash metal to the masses, while The Smiths kept the indie genre on its toes.

AC/DC - Who Made Who

AC/DC’s first ever excursion into the film world beyond their own Let There Be Rock was this soundtrack for Stephen King’s Maximum Overdrive. The film might have been an absolute stinker, but this collection of Brian Johnson-era faves plus Bon Scott’s sublime Ride On, along with two new instrumentals and the hit single Who Made Who, put AC/DC back in the charts.

They almost refuse to acknowledge its existence these days, but let’s not forget that the bookish hip-hop act of today started life as a punk band. Hooking up with Def Jam’s Rick Rubin and Slayer guitarist Kerry King, they crafted the ultimate rap party album, sampling AC/DC and Zeppelin.

By the time we heard this third album from these Dunfermline rockers, Stuart Adamson and Bruce Watson’s guitars had come very much to the fore, as evinced by the No.7 single Look Away (their biggest ever UK hit). The album was notable for having more Celtic themes infiltrate the band’s music. This would develop into a straight-ahead hard rock sound in the 90s.

Bon Jovi had made a splash from the off with 1984’s debut, but seemingly faltered with 1985’s 7800 Fahrenheit (referred to in one magazine as ‘a pale imitation’ of their first record). But it all came together here: cowboy anthems and tales of New Jersey love, heavily inspired by Bruce Springsteen and Southside Johnny, wrapped up in shaggy hair, tight jeans and Desmond Child hooks.

After being given advice backstage at a Lynyrd Skynyrd show by Ronnie VanZant, Steve Earle became a regular on the Nashville scene, working with the likes of Guy Clark and Emmylou Harris. Guitar Town was his first proper shot, evoking memories of outlaw country but in new clothes. Eloquent, outspoken, politicised and a rebel, Nashville hated him but modern country rock was born.

Who would have thought five Deep Purple-obsessed Swedes would go some way to stealing Jon Bon Jovi’s thunder in his year of ascension to the hair-metal crown? But Joey Tempest and the rest of Europe (the band, that is) went one better than Jon by scoring a No.1 single, with The Final Countdown. It even prompted a stylistic rethink from Jon a few years later.

Co-produced by the mercurial Daniel Lanois, Gabriel’s fifth studio album was the one that made him a massive international star. A ground-breaking stop-start animation video for the single Sledgehammer helped, but Gabriel’s songwriting hit a new peak, not least on Don’t Give Up, a duet with Kate Bush (her third appearance on a Gabriel album), the uplifting Big Time and the menacing Red Rain. In Your Eyes is also regarded as one of the greatest love songs of all time.

Just as their ex-singer was reaching a massive global audience, it was lucky number 13 for Genesis, as Invisible Touch became their biggest-selling album and gave them five huge hit singles. Despite Phil Collins’s tiresome dominance, the singles were fine pieces of prog pop, and longer numbers like The Brazilian showed they hadn’t entirely deserted the old prog rock days.

A new look, three-piece Journey recorded Raised On Radio when singer Steve Perry decided they could do without the rhythm section of Ross Valory and Steve Smith and sacked them. Bloodied but unbowed, the band recorded this slick piece of AOR with a heavy R&B influence coming from Perry. One of their best.

Since his acrimonious departure from Metallica in 1983, Dave Mustaine has busied himself with being a thorn in his old band’s side. Fortunately for metal fans, much of this has come in the form of great metal, and some might say the band’s second album, with its snotty title track – and a surprising cover of Willie Dixon’s I Ain’t Superstitious – was their best.

Just as Bon Jovi headed the hair brigade in 1986, snarling back in their faces were Metallica and their thrash crowd. And while time may have treated the hair metal sound harshly, Metallica’s Master Of Puppets remains one of metal’s mightiest records ever. No singles from it were released, but tracks such as Battery, the title track and Welcome Home (Sanitarium) set the bar too high for many who followed. This is Metallica’s greatest ever record, if not the best heavy metal album of all time.

The popular train of thought concerning Motörhead is that it was downhill all the way after 1981’s No Sleep ‘Til Hammersmith. But this album shows it's simply not true. Orgasmatron (produced by Bill Laswell) is a brilliant latter-day ’Head record, of which there are many, and is the kind of snarling, Motörhead album you expect from the band. It’s also the last with drummer Pete Gill.

Poison - Look What The Cat Dragged In

If ever there was an album that truly defined bubblegum rock, then Poison’s debut record has to be the one. With their tongue-in-cheek lyrics, full of innuendo, Poison’s pretty boys were never threatening like some of their Sunset Strip counterparts. The insanely catchy Talk Dirty To Me and the title track remain true pop rock classics.

Typical that for his first post-Van Halen record Roth surrounded himself with the likes of Steve Vai, Billy Sheehan and Greg Bissonette and unleashed a brash, loud and colourful collection of Halen-esque party-influenced hard rock. Yankee Rose, Goin’ Crazy!, Tobacco Road and Shy Boy all rocked, and the ensuing tour was a huge success in the US in ’86.

A songsmith of almost unmatchable pedigree, Paul Simon bypassed the problem of where his muse could successfully take him next by changing tack entirely. Although the basis was his ever-eloquent songwriting, the rhythms were all African and the record even featured the likes of Ladysmith Black Mambazo. But what’s the inexplicable appearance of Chevy Chase in the video for You Can Call Me Al all about?

For some people this, Slayer’s third studio album, remains the greatest 29 minutes of heavy metal ever. When confronted with the band performing it live, after contending with Tom Araya’s bowel-rumbling scream at the beginning of Angel Of Death, the band just don’t let up until Raining Blood. Breathless stuff.

The Smiths - The Queen Is Dead

Not for every rock fan perhaps, some of whom probably found the sight of Morrissey flailing around too effete for their robust tastes. But in Johnny Marr’s guitar playing there is much to revel in, and when combined with Morrissey’s wordplay, as it does on The Queen Is Dead, Bigmouth or The Boy With The Thorn In His Side, the results are nothing short of inspired.

By 1986 Springsteen was an arena rock phenomenon, known for his camaraderie with his E-Street Band and for playing four-hour shows. So despite the fact that this was originally a sprawling five-vinyl disc (now three CDs) of live material drawn from a 10-year period – the E-Street’s best – it was enormously successful. It also spawned the excellent single Fire that Bruce had written for Elvis Presley before he died.

Status Quo - In The Army Now

Status Quo had originally called it a day in 1983 following Back To Back. In 1986 they returned with a new line-up, although Status Quo’s loyal fans were understandably wary after the likes of Marguerita Time. In The Army Now was surprisingly fresh for the time, and gave the band some more big hits with Rollin’ Home, Red Sky and the title track.

Van Halen upped the keyboard and power ballad quota on this first post-Dave Lee Roth record – and immediately hit the jackpot. With 5150 they laid down a blueprint that would serve them better in commercial terms than ever before. This is an almost perfect summer rock album, and a sheer joy to listen to, even if fans of Roth would never really take to Sammy Hagar as the new (infinitely better and more successful) singer.