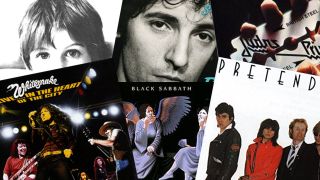 In 1980, rock was rock-hard. While Black Sabbath 2.0 came screeching out of the gates with their fresh blood Ozzy replacement, Ronnie James Dio, Back In Black and Wheels Of Steel saw the release of two of the finest heavy metal albums ever made.

But there was plenty more going on beyond the heavy metal scenes. San Fransisco hardcore mob Dead Kennedys turned the punk rock template on its head with their incendiary debut, while U2's take on post-punk inspired legions of indie followers in its wake.

Here, we look back at the best albums from the year that kicked off one of the most important decades in music: 1980.

Undoubtedly the album of 1980. AC/DC show there’s life after Bon Scott by bringing in Brian ‘Beano’ Johnson on vocals and retaining the production talents of Robert John ‘Mutt’ Lange. The results, from the tolling turbulence of Hell’s Bells to the defiant Rock’n’Roll Ain’t Noise Pollution, are awe-inspiring.

Could the mighty Sabbath ever recover from the loss of their talisman, Ozzy Osbourne? You bet they could. Many wondered whether the mythical visions of ex-Rainbow vocalist Ronnie Dio would fit comfortably with Sabbath’s bloody bomb-burst, but one listen to this album blew all doubts away. A marriage made in Heaven… and Hell.

Just when everyone thought they’d seen the back of punk rock in Britain, along came a raging hooligan from San Francisco called Jello Biafra. A macerating slice of hardcore/punk made all the more alarming by Biafra’s panic-stricken wailing, Fresh Fruit... remains a twisted classic. With tracks such as Kill The Poor and Stealing People’s Mail, how could it be anything else?

Let’s face it: no matter how well-received Dire Straits’ previous two albums had been (1978’s self-titled debut and 1979’s Communique), no one could possibly have predicted how big these unassuming Deptford-formed pub rockers would become with their third, Making Movies. Mark Knopfler’s bitter-sweet storytelling on songs such as Tunnel Of Love and Skateaway twanged at the nation’s heartstrings and turned the Straits into megastars.

With sisters Ann and Nancy Wilson looking impossibly glamorous and Dynasty-like on the cover, this is an undiscovered gem in Heart’s back catalogue. With Nancy’s boyfriend, guitarist Roger Fisher, no longer in the frame, Bebe Le Strange showcases a leaner, rockier, less folksy band. But equally, tracks such as Sweet Darlin’ hint at the super-glossy direction Heart would follow in the mid-80s on their monster hit singles These Dreams and Alone.

People were expecting great things from the leaders of the New Wave Of British Heavy Metal, but no one expected the band’s debut to be quite this gritty, ramshackle and ill-refined. A mile away from the sleek metal machine Maiden would later become, their debut has nevertheless endured the test of time well. Vocalist Paul Di’Anno (later to be replaced by Bruce Dickinson) barks out the words like a drunk threatening you with a broken pint glass, and the band carry out their hybrid punk/metal thing with aplomb.

Silver-tongued, velvet-coated, feather-boa’d American AOR doesn’t get much better than this. For his third record with the Bay Area band, vocalist Steve Perry pours on the syrup and smears on the cheese, especially on the mega-schmaltzy Good Morning Girl. But it isn’t all fluffy bunnies, as more upfront tracks such as Any Way You Want It prove. This album is all gleaming, shiny, uplifting and just plain great.

Judas Priest underwent an amazing transform-ation for British Steel, underpinning their mighty metal with hitherto undiscovered pop sensibilities. Hardened headbangers might have chortled into their bottle of Newcastle Brown, but Judas Priest knew exactly what they were doing, and chalked up hit singles with Living After Midnight, Breaking The Law and United, while the album itself peaked at No.4 in the UK.

Kate Bush - Never For Ever

These days the release of a new Kate Bush album is a rare event indeed, but back in the 80s the High Princess Of Dreamy Wistfulness was cranking them out without a care in the world. Never For Ever went to No.1 in the UK thanks to the success of the feisty Babooshka and Army Dreamers, the latter a sad anti-war song.

No argument: this is the best studio album from the definitive Motörhead line-up of Lemmy, ‘Fast’ Eddie Clarke and ‘Philthy Animal’ Taylor. The predecessor to No Sleep ’Til Hammersmith, Ace Of Spades was where it all came together for the band in a blizzard of talcum powder (Shurely shome mishtake? – Ed.) and 100-per-cent-proof noise.

No apologies for including this storming album from the ex-UFO guitarist. Mad Mickey is something of a laughing stock these days, so it’s easy to forget how popular his band the Michael Schenker Group were at the beginning of the 80s. This album reached No.8 in the UK, and tracks such as Armed & Ready and Cry For The Nations are forgotten commercial rock classics.

Widely regarded as a busted flush after his sacking from Black Sabbath, Sharon brought Ozzy to his senses and somehow coaxed this excellent album out of him – with a little help from the late guitar genius Randy Rhoads along the way. Tracks such as Crazy Train, Suicide Solution and the endearingly ridiculous Mr Crowley established Ozzy as an artist in his own right.

With this glorious album (which deserverdly went to No.1) Chrissie Hynde found the perfect foil for her sultry, acerbic songwriting, in the evocative guitar playing of the late James Honeyman-Scott. Pretenders is rammed to the rafters with killer track after killer track, and made the band a household name.

Released in December 1980 in the US, Hi Infidelity just squeezes into this list. Keep On Loving You is on it, which reached No.1 in the US and even, remarkably, got to No.6 in the UK. REO Speedwagon were, and remain, chronically unfashionable, but this album is a classic of the AOR genre. And we like it.

The album that laid the foundations for Rush’s post-sword-and-sorcery career. After 1978’s confused Hemispheres, Permanent Waves highlighted a leaner and less convoluted approach. Rush wrote deceptively memorable songs, while at the same time retaining their art-rock tendencies. A top-five album on both sides of the Atlantic, Permanent Waves also spawned the hit single The Spirit Of Radio.

AC/DC’s Back In Black might have been the album of 1980, but Wheels Of Steel ran it damn close. Indeed, there’s an argument for saying Wheels Of Steel is the definitive commercial heavy metal album of all time, because its first-punching anthems are as familiar today as they were almost 40 years ago. On this superb record, every track, from Motorcycle Man to Machine Gun, is a work of Barnsley-fied metal brilliance.

An epic – some might say sprawling – double album, this is the record that broke Bruce Springsteen into the big time, largely thanks to the presence of Hungry Heart and the title track (a straight-from-the-heart soul-stirrer par excellence). Some of The Boss’s critics say it contains too many filler tracks and that it would have been much better if it had been a single album. We say bollocks, and instead prefer to wallow in the magnificence of it all.

Boy is the album that drew up what became the U2 formula: Bono makes his first heroic call to arms; The Edge plays crusading guitar passages; Adam Clayton and Larry Mullin supply the spiritual heartbeat; and Steve Lillywhite delivers it all with a monolithic production job. What more is there to say?

On this album Van Halen were at the top of their game. Eddie Van Halen’s guitar pyrotechnics were even more spectacular than before, while David Lee Roth’s ego had left planet Earth and set the controls for the heart of the Sun. Loose, sloppy and spontaneous, no wonder there’s a track called Loss Of Control.

Whitesnake - Live... In The Heart Of The City

Whitesnake actually released two albums in 1980: this one and Ready An’ Willing. It was a toss-up which one we included here, but Live… wins because it shows Whitesnake at the height of their blues-rock powers. David Coverdale delivers a rich vocal performance – as well as regular doses of trouser jostling.