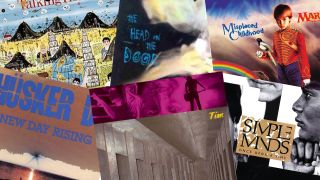 Midway through the 80s marked the year when the charts truly began to rock, and Slayer and Hüsker Dü – among plenty of others – released albums of absolute unchartered genius, reflecting all colours of the rock spectrum. The nascent strains of grunge began to take shape, experimental prog swirled around the charts and Dire Straits secured their place as a cultural touchstone forevermore.

Here is an album with a hatful of addictive melodies, pristine and measured pop-rock arrange-ments, gorgeous three- and four-part harmonies, two gilt-edged classics in Walk Like An Egyptian and the Prince-written Manic Monday, and an overall infectious, dizzying sense of fun. Plus Susanna Hoffs. Seriously, what’s not to like here?

Like Björk, Kate Bush has always had a highly developed sense of her voice as an instrument that can growl or croon as the mood demands. It’s employed to great effect on this self-produced album, backed by tender keyboard washes and layers of pounding drums. Listening to the strong opening salvo of Running Up That Hill, Hounds Of Love and Cloudbusting leaves you seriously breathless.

Is this goth? Hard rock? Pop? Yes to all. Love has great tunes (Rain and She Sells Sanctuary were monster hits), a tight, driving rhythm section, and some Zeppelin-esque riffs from guitarist Billy Duffy. It’s lean and lithe, with not an ounce of fat on it. This album rips by with a big-hearted swagger that suggests The Cult are operating at their peak.

The Cure - The Head On The Door

Robert Smith once joked that he had only two songs: the sprawling gloom of Faith, and the effervescent ephemera of The Lovecats. Well, the latter approach is largely favoured on this collection of euphoric pop songs. Singles Close To Me and In Between Days are essential Cure, and you should also check out phenomenal album tracks Push and A Night Like This.

Strong melodies and a keyboard-heavy sound characterise this third album from former Rainbow and Black Sabbath frontman Ronnie James Dio and his stellar band. Trouble was just around the corner, though: this would be the last album with guitar hero Vivian Campbell, who went on to supply first Whitesnake and then Def Leppard with his chops.

’I want my MTV’ they sang. Well, thanks to Money For Nothing, they sure got it. An addictive riff, a memorable computer-generated video and the aforementioned refrain propelled Mark Knopfler and Dire Straits to another level, and turned Brothers In Arms into a huge international hit.

Although Heart’s second line-up had cut their teeth on 1983’s Passionworks, follow-up Heart feels like a debut. A new label, new producer and the decision to work with some of the finest hitmakers the West Coast could muster gave Heart a US No.1 album and five smash singles, with What About Love?, Never and These Dreams being the pick of a very high-quality crop.

A furious wall of buzzsaw guitars and screaming conceals what is really an intelligently crafted set of melodic pop songs from this critically acclaimed and highly influential Minneapolis trio. It might sound like it took only as long to record as it does to listen to, but its freshness and immediacy form a major part of the album’s considerable appeal.

Listening to the Jesus And Mary Chain’s terrific debut album occasionally feels like standing in the corridor of a rehearsal studio listening to two bands practising at once, as sublimely catchy melodies and slabs of nihilist white noise wilfully battle each other for supremacy. It’s thrilling stuff though, and the best tracks are unquestionably the singles Just Like Honey, You Trip Me Up and Never Understand.

According to folklore, it was a nasty acid trip that inspired frontman Fish to delve into his personal history and lay it bare on what is arguably Marillion’s definitive album, with Kayleigh/Lavender the double whammy that turned them into an arena act. This neo-prog confessional feels like musical therapy, its elaborate storyline dramatised with some epic orchestrations by Stones producer Chris Kimsey.

Despite the well-documented troubles surrounding its making, Theatre Of Pain solidified the Crüe’s position as premier metal stars, and proved to be their biggest seller to date. This was helped along by their rollicking cover of Brownsville Station’s Smokin’ In The Boy’s Room and its accompanying video.

Ratt’s second album had a lot to live up to, with its predecessor, Out Of The Cellar, having made it into the American Top 10 and sold three million copies.

For this major-label debut, college radio favourites The Replacements became a tighter, more focused band, due largely to the canny influence of The Ramones’ Tommy Erdelyi, who produced the record. Mainman Paul Westerberg was clearly becoming a serious songwriting force to be reckoned with here, and the fact that this was never realised in sales terms is as mystifying now as it was then.

Mixing abrasive punk rock with emotionally raw and wounded lyrics, the Washington, DC band added a previously unheard dose of vulnerability and personal fragility to the hardcore template. Produced by Ian MacKaye, who’d laid Minor Threat to rest a couple of years earlier, Rites Of Spring turned aggression and introspection into perfect bedfellows, paving the way for the shape of punk to come.

Simple Minds - Once Upon A Time

Once Upon A Time is an album that sounds like the 80s in microcosm, perfectly delivered by the quintessential 80s band . Producer Jimmy Iovine (U2, Springsteen) and mix maestro Bob Clearmountain (pretty much everyone) smartly package the band’s chiming guitars, glossy synths and slick percussion, while for his part frontman Jim Kerr delivers hits such as Alive And Kicking to row Z as if his very life depends on it.

You suspect that if anyone were to able find a way to return from the underworld, they would confirm that this album is pretty close representation of what eternal purgatory might sound like. Dissonant, distorted and very, very fast, Hell Awaits is a fearsome, uncompromising paean to all things evil, dead and deathly which, with hindsight, sounds years ahead of its time.

The Smiths - Meat Is Murder

Morrissey may once have likened Andy Rourke’s contribution to The Smiths to that of a lawnmower part, but his bass line on Rusholme Ruffians is one of this album’s many highlights. Elsewhere, that most eloquent and acerbic of lyricists unleashes a dictionary-load of wit on an increasingly adoring fanbase. It’s also possible that the wonderful ‘Belligerent ghouls run Manchester schools’ is the best opening line in music history.

Little Creatures has straighter edges and a more stripped-down aesthetic than its immediate predecessors in Talking Heads’ back catalogue, and it’s all the more accessible as a result. Producer Steve Lillywhite crafts an album of accomplished grown-up pop, and the band are on fine form on tracks such as And She Was, Creatures Of Love and the huge hit single Road To Nowhere.

Rain Dogs is the middle album in a loose trilogy that includes the somewhat unlikely sounding Swordfishtrombones, released a couple of years earlier, and Frank’s Wild Years, which followed on in 1987.

Rain Dogs is a wonderfully crafted body of work, with 19 songs documenting drift, despair and dislocation in a way that only Waits can. Musically it’s wonderfully imaginative and very weird; a cacophony of eclectic instrumentation and off-kilter beats is rendered no less unsettling by Waits’s unmistakable gravelly vocals.

A companion album to ZZ Top’s squillion-selling Eliminator, Afterburner speeds a little further down the road of technology than its illustrious predecessor (on the sleeve, the car becomes a spaceship, for a start). But in all other respects it’s classic ZZ Top, with the hirsute rockers (and the counter-intuitively named Frank Beard) serving up another helping of low-down, beer-swilling biker boogie.