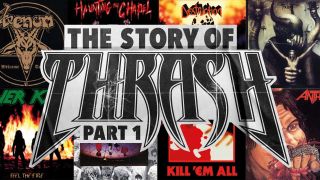 “If you ask me what the first thrash metal song was, it’s Exciter by Judas Priest,” reckons Gary Holt, who joined Exodus in 1981 after a crash course in riff-playing from the baby-faced quintet’s co-founding guitarist, Kirk Hammett.

Gary and Kirk were among the discerning headbangers worldwide whose turntables and boomboxes were dominated by the heaviest bands of the day: Priest, Motörhead, Iron Maiden and the New Wave Of British Heavy Metal multitudes.

Simultaneously, US and UK punk scenes were being reinvigorated into hardcore by furious pioneers like Black Flag, Minor Threat, The Exploited and Discharge; here, in a petri dish, are the spores of thrash.

“It was all at once, y’know? I was discovering The Varukers at the same time as discovering Angel Witch,” enthuses Gary. “It sunk into our brains, this mixture, the punk attitude and tempos with the technical ability and melody of these great metal bands. We stood on the backs of giants and rode their coattails!” he laughs.

“We did our own thing, but it all starts somewhere.” Unbeknownst to Exodus, other young Americans were getting similarly giddy about the new torrent of harder, faster metal appearing in record store import bins. In New York City, bushy-haired leather-boys Anthrax were desperate to impress Jonny Zazula, owner of the East Coast’s coolest record stall:

“We realised this is the guy we need to be involved with, he has his finger on the pulse of the music we love,” explains Scott Ian, who co-founded Anthrax in 1981. “He was starting a label to put out new-school underground metal bands – thrash wasn’t even a word yet – and we wanted to be part of that, so we were working as hard as we could.”

“The first time we played with Metallica it was like looking into a mirror,” recalls Gary. “We’d never heard any other bands doing the kind of stuff we were doing.”

Metallica’s rise to the top of the underground was swift. Bobby ‘Blitz’ Ellsworth was already fronting New Jersey hellions Overkill when he heard Metallica’s 1982 Live Metal Up Your Ass demo, but this tape upped the ante.

“All of a sudden this combination – of the metal that was coming out of the UK, and the punk scene from the USA – came together,” enthuses Bobby.

“It had angst, but it went [to] another place with regard to musicianship. You could see that the musical possibilities were endless.” Metallica’s fiery lead guitarist Dave Mustaine played a key role in that early impact.

Dave’s Metallicareer was infamously brief – sacked on the brink of stardom and replaced by Kirk from Exodus, he formed Megadeth as a vehicle for his avenging rage. But much of Metallica’s early edge (and several killer riffs) came from Dave.

“There was so much chemistry and combustion in the band,” he reflects now. “It was a weird frickin’ dynamic. We did argue and fight a lot, but I think that’s because what we were doing was so… monumental, and we knew it. It put us in a spirit of invincibility.”

Bay Area Native Chuck Billy was fronting melodic rockers Guilt when Metallica relocated to San Francisco; he soon joined local thrashers Legacy, just before their name changed to Testament. Although Chuck remembers Exodus’s demo as “the spark that lit up the Bay Area”, Metallica live were a revelation.

“It was the energy that you didn’t see at any other shows,” gushes Chuck. “Once you saw Metallica at one of these small clubs, you knew there and then you were a fan. It all happened so quick, it was just BAM! here’s our live show, here’s a demo, here’s a record, here’s a movement. It grew so fast.”

“Venom was the final reason to form a band,” asserts Tom Angelripper, then a coal miner in Germany’s Ruhr Valley, who formed Sodom after hearing the Geordie hellraisers’ seminal 1981 debut Welcome To Hell.

“We could not believe how heavy a three-piece band could perform. We made the decision to make music that should sound heavier than Venom and faster than Metallica. That was our slogan!”

Mille Petrozza formed his first band in Essen, Germany in 1982 after witnessing Raven’s fiery live show, becoming Kreator in 1984. “The thing that really connected from the punk attitude was the feeling that you can do anything: you can play three chords and make them sound huge,” asserts Mille.

All thrashers found space in their metal hearts for punk, and soon the traffic was two-way, as hardcore kids found themselves drawn to this violent twist on a genre they’d previously hated.

Boundaries of taste and velocity were smashed continuously from 1983-85, as increasingly brutal recordings emerged across the globe:

Each had their own warped take on the form, but arguably one band most powerfully motivated metal’s rabid acceleration in this period:

“Slayer were super-heavy and so fast, it was the most extreme thing I’d heard… There was simply nothing else like them,” enthuses Brian Slagel, who formed Metal Blade Records in 1982, eagerly snagging Slayer soon after.

“In LA at the time, the glammy image was everywhere. Bands like Mötley Crüe and Ratt, with their pop metal approach, were the hot ticket. This was totally going against what those bands were doing.”

Slayer provided the ravening spur, but also the stiffest competition for the emerging thrash scene; Brian remembers Metallica asking anxiously if Slayer’s new record was faster than theirs.

“I’m sure this rivalry inspired Slayer to get more and more extreme,” adds Brian. “They were always looking to push the envelope.”

This one-upmanship in aggression seems a crucial impetus on thrash’s rapid development. “Absolutely,” affirms Mille. “Every one of the few bands around at that
time, we all wanted to be heavier than the last Bathory or Venom record. We were trying hard, you know!”

Many of these bands were in touch via the pre-Internet social network of smudged notepaper and home-dubbed C90s, as Mille fondly recalls: “My first tape-trading friends were Max from Sepultura, Katon from Hirax and the Possessed guys. I wasn’t a real collector, so we recorded our rehearsal just so we could send these people some music!

"The scene in Essen was very small, there was nowhere to play, plus we didn’t feel ready. So we didn’t record a demo to get gigs, we sent our tape off in return for Mercyful Fate live at the Dynamo.”

“It was huge,” affirms Bobby Blitz of the mid-80s TDK-in-a-jiffy-bag revolution. “I guess it was primitive filesharing. Happening simultaneously were these little rags done on Xerox machines, with personal sections where you could trade demos with penpals.

"The only new car I ever bought in my life was in 1984. [Overkill bassist] DD Verni and I filled it with beer and went from New Jersey to Montreal to see Voivod, Celtic Frost and Destruction, at their first North American thrash festival.

We were aware of these guys through fanzines and tape-trading, so we drove seven
hours north because we loved this stuff. It wasn’t about convenience, but it was worth travelling for!”

“I think it’s better than all the others,” affirms Gary Holt, “and the others are fucking great! I’ve been trying to follow it up my whole life, and I can’t, no matter how good a record I make!”

Despite these triumphs, thrash was a resolutely underdog genre, mocked and misunderstood by the wider rock world, but it was rising fast, and a hierarchy of world-class trailblazers was emerging.

“We went from nobody knowing who we were, to basically touring the world,” says Scott Ian of the year Anthrax released Spreading The Disease, the title a handy metaphor for the global proliferation of this electrifying new music as it entered its watershed year, 1986…