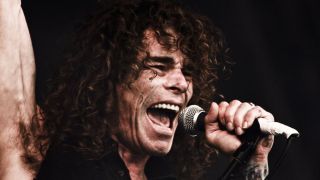 Overkill have recently released their Historikill: 1995-2007 boxset, so we joined frontman Bobby ‘Blitz’ Ellsworth for a bracing look back through the band’s years of decay and electro-violence!

New Jersey’s Overkill formed in 1980, years earlier than the vast majority of thrash bands. This, along with their close proximity to the booming NYC punk scene, helped forge their unique identity. “We were a short subway ride away from all those clubs like CBGBs,” says Bobby. “You’d see Debbie Harry walking around the streets and The Ramones drinking beers out of bags. We would go Ramone-spotting at the weekends, because there really was five of ‘em at the time!”

“What a great fuckin’ experience,” he adds, “to absorb that punk attitude, while the musicianship of NWOBHM bands like Angel Witch or Tank filtered across the ocean and got our attention. We became a thrash band but we were punk kids who liked heavy metal. And it was easy to play New York shows – all you had to do was turn up with your stuff, as long as you didn’t expect any money!”

Bobby recalls how it felt in 1983 when Metallica’s Kill ‘Em All changed metal forever. “For sure, thrash got everyone’s attention. We knew what we were, when we heard it. Metallica had laid the blueprint for what was to follow – and many did follow, ourselves included. We didn’t have the West Coast sound but we wanted that power. It was life-changing in terms of direction.”

TAKING OVER THE ATLANTIC

Overkill were distributed by the major label Atlantic Records from the beginning, with their scorching 1985 debut Feel The Fire. By their even-more-powerful second album, Taking Over (1987), however, they were directly signed to that company. From the album’s title to the cover depicting the band levelling rifles at us, it was clear Overkill intended to rule the world. “We needed that massive ego,” reflects Bobby, “to be able to run through walls. Believe it and you will eventually become it.”

Back then, every worthwhile thrash band got snatched up by the majors. Looking back, Bobby still believes it was, “a great opportunity. The big guys wanted to suck the teat of thrash, because there was money in it. Anthrax went to Island, Megadeth got Capitol… It was like living in the last era of the music industry’s excess. We went from vans to tour buses. So I remember the good stuff, but I also remember sitting in an Atlantic guy’s office. He had a three-piece suit and a Cuban cigar, telling me how he was gonna promote the record. When he excused himself to take a call, I leaned over to DD (Verni, bassist and Overkill co-founder) and said, ‘We’re fucked: he doesn’t understand one thing about us!’ So we had the music-promoting machine, but we were more at home with barbecues than all the caviar and champagne.”

Calling an EP !!!Fuck You!!! might ruffle a few feathers these days, but in 1987 it was even more daring. “’Fuck you’ is a term of endearment in New Jersey,” says Bobby, cackling. “Some guys use it to propose marriage! When DD Verni and I first heard that Subhumans song played by DOA in Montreal, our eyes lit up: we had to adopt this. So it’s not always about original ideas – it’s about stealing the good shit!”

Overkill played as hard as they worked. “We’d inherited our parents’ work ethics,” notes Bobby, “and with that work came rewards, whether it be dates with fine young women, or excessive drinking that you could bounce back from. And the occasional fistfight, when ego met ego. We were beer-drinkin’, girl-lovin’ hooligans playing heavy metal! Of course we dabbled with drugs, but we weren’t really potheads or pill-heads. I did more drugs prior to Overkill than I did after!”

After 1989’s landmark album The Years Of Decay, Overkill parted company with guitarist Bobby Gustafson over the time-honoured musical differences. More killer Atlantic albums ensued, like Horrorscope (1991) and WFO (1994), before Overkill parted ways with the label – a move which Bobby considers, “the best thing that ever happened”.

“Atlantic started losing interest,” he sums up. “Metal had been the flavour of the day, but after ‘93 the most popular genre was based on heroin addiction out of the North West! Being independent and managing ourselves was hard, but great. Me and DD were like fuckin’ kings, cutting killer deals which equalled those of the Atlantic machine. We were so fuckin’ proud because we’d reinvented ourselves and knew who we were. We were not Pizza Hut or Domino’s – we were that fuckin’ pizza shop on the corner that people come to on a Friday night because they love your shit. It’s not everybody, but they’re still lining up out the door.”

The era of independence documented by the Historikill boxset began with The Killing Kind (1996), a crushingly heavy record which really exuded Overkill’s newfound indie spirit. Bobby recalls a key conversation with Verni. “I asked him, ‘What do you think we’ll do on the next record?’ And he said, ‘Well, we’re not gonna reinvent the fuckin’ wheel, are we’. I was taken aback, but then he said, ‘Blitz, there’s nothin’ more dangerous than two guys from Jersey with nothin’ to lose.’ And that really summed the whole thing up. It’s not about our popularity – we’re gonna make some fuckin’ noise and there’s gonna be a fuckin’ body count when we’re fuckin’ done’. We totally benefited from acting like it was over and it didn’t matter!”

The Historikill period ended with 2007’s thrash gem Immortalis. That album saw Overkill revived all over again by the arrival of drummer Ron Lipnicki who remains to this day. “We’d calmed down on the sex, drugs and rock ‘n’ roll, but this was Ron’s first experience and he was going fuckin’ berserk,” Bobby laughs. “It showed in the drums: he gave us an extra something! I love this guy. When we were on the Gigantour with Megadeth, Dave Mustaine said to me in the breakfast line one morning, ‘Blitz, you know I love you man, we’ve been friends forever, but put that drummer on a fuckin’ leash or you’re goin’ home!‘”

In amongst all the highs, there were inevitably lows. Bobby encountered two shocking health setbacks – an aggressive form of nose cancer in 1998, followed by an onstage stroke in 2002 which briefly blinded and deafened him. “It sucked,” he says now. “These weren’t things a young man wanted to go through.”

Bobby describes the stroke as, “a TIA (transient ischaemic attack), which my mother has had, so it’s genetic. We were killing a packed house in Nuremberg. Somewhere around the sixth song, I thought to myself, ‘Can you fuckin’ believe this? The lights have gone out.’ But obviously the lights didn’t go out – mine did! Then the lights came back on and I couldn’t hear anything. I looked over to see DD reaching for me, and everything was in trails. I could tell by his face that I was fucked! I was probably twitching and all sorts of shit. I made my way to the side of the stage, then fell down a flight of stairs and knocked myself out. I did more damage falling down the stairs than I did from the stroke! My mother hasn’t had one in 15 years and that’s the only incidence I’ve ever had.”

These life-threatening obstacles only confirmed Bobby’s dedication to his lifestyle – it’s not like he suddenly decided that what he really wanted to do was act or save dolphins. “Yeah, I wanna ride motorcycles and play heavy metal! It was really simple for me – it was never a question of stopping, more of ‘When can I get back to doing it?‘”

Ever since 2010’s Ironbound, Overkill have been signed to Nuclear Blast for Europe. The fruits of this new union has been obvious: this year, the band released their most successful studio album in White Devil Armory.

“I knew it’d be great in our opinion,” admits Bobby, “I just didn’t know it’d be so great with regards to popular opinion! We all have a strong chemistry and that’s the bottom line when making a record. You’ll never see dirty laundry on [the internet] about Overkill, because we fuckin’ like each other. This is the reason we’re getting these results.”

Historikill marks Overkill’s first worldwide release with the megalithic German label. “They’re hoarders!” Bobby says. “They hoard every band out there and they work the hell out of this shit. And let me tell you: if I know the guy on the other end of the phone’s wearing an Exodus shirt, I know that fuckin’ guy understands me, as opposed to a suit ‘n’ tie guy.”

He points out that, “Nuclear Blast are all about history as well as the present. So this boxset is the perfect worldwide launch. In the darker days of heavy metal, not everyone went home and worked for Mom and Dad. Especially not these fuckin’ guys from New Jersey! So here’s 14 CDs that happened when grunge was pissing all over your favourite genre. If you want a quick history lesson, Historkill’s your baby.”

The 10 best Overkill songs that aren't Hello From The Gutter

Overkill are touring the UK and Ireland in 2016 with Vader at the following dates: