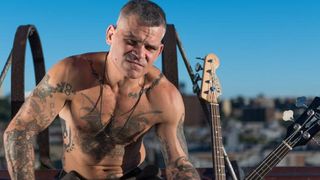 In a career that stretches over four decades, perhaps nobody is better to talk with greater authority about the history and evolution of punk, hardcore and New York City than Harley Flanagan. Inducted into the 1970s New York scene by his aunt Denise, Flanagan began playing gigs at CBGBs and Max’s Kansas City for The Stimulators at just eleven years old, before forming his own band, pioneering NYHC crew Cro-Mags. Still releasing and recording music as a solo artist and set to release his autobiography Hard-Core, Life of My Own later this year, Flanagan has been one of the most enduring presences in alternative culture and, naturally, has a few stories to tell…

You had a book of poetry released as a nine year old, that’s quite an amazing achievement…

“Yeah, its part myth, part fact. I did write a book when I was… I think seven and it got published when I was nine, but it was two stories, two short stories: I did writing and artwork and illustration. It wasn’t poetry, but I think the reason that people think that is that Allen (Ginsberg, highly influential Beat generation poet) wrote the intro. So I think people put two and two together and thought ‘Oh Harley must be a poet too.’ But it wasn’t like that.”

You must have got the bug for creativity early?

“Oh yeah, I think I’ve always been a creative person. I think everybody has creative energy in them, but some people are just driven. I think back and I’ve got drawings that I was doing of Jimi Hendrix from when I was six or seven years old. I’ve always been doing art and playing music for as long as I can remember.”

With Allen Ginsberg being a family friend, was he an inspiring character to be around?

“I don’t know man, at that age I just knew him as Allen. I didn’t understand the significance of his input in culture. When you’re a kid you don’t put that kind of importance on people you know, he’s just a friend. But he was a really cool guy. It probably wasn’t until after her died that I realised just how important he was.”

And when did your interest in music begin?

“Music was always there from birth man. My aunt [Denise Mercedes], my mom’s younger sister, was playing in bands in the 70’s, and my grandfather played classical piano and the flute and clarinet, and my grandmother played piano, my dad messed around on the guitar. So it’s always been in me. I’ve been on stage since I was nine or ten years old.”

Playing drums for The Stimulators as a kid at the height of punk rock must have been eye-opening?

“Oh it was a crazy time. Johnny Thunders was still playing there regularly, The Dead Boys and all kind of freaks like Wayne County, who became Jane County, was still there. So it was all kinds of craziness. Andy Warhol was hanging out, it was a decadent time with lots of drugs floating around the place but I don’t think that at ten or eleven years old you really realise just what’s going on. Now I look back and think ‘Jesus fucking Christ! What was going on?!’ I grew up way too fast in a lot of ways, but I’m glad I got to see the things I saw.”

When punk went back underground and the hardcore scene began, how different did it become?

“Well the mainstream media declared that punk was dead. For me the time that Nancy [Spungen, Sid Vicious’ girlfriend] died was when shit got really ugly. Before that punk bands were signing to major labels and getting big deals, but once that happened it got really horrible. And you had all these magazines saying that punk rock was dead, well that’s all well and good but what about the people that want to listen to it still? It got even more real, because it wasn’t the thing that was trendy, and the next generation we had bands like Dead Kennedy’s, Circle Jerks and Bad Brains… then ultimately us who kept it going. You can’t stomp out the spirit of something like that. It just got to the point where we had taken it to the next level. And we didn’t try harder to get the attention, we didn’t give a sit about the attention. We tried harder because we needed to, we had to get it out. That was our lives. It was purely for the experience, the love. There was no record deals for us.”

And the shows were more extreme too…

“It was much more underground. It’s really hard to explain. Just take a look at the We Gotta Know video. That was the first time any major television network showed any kind of slam dancing of any kind. Most of the world outside of hardcore had never seen that before, so that video was the game changer. Suddenly you’ve got metal heads and all these other guys going ‘What the fuck is this? These guys have shaved heads and tattoos and are throwing each other off the stage! I’ve never seen anything like this!’ and that changed culture a lot.”

Do you think that Cro-Mags get the credit you deserve for that?

“I think we do from the ones who know. From Scott Ian and Anthrax, Pantera, the big boys, even Metallica, the people that were doing it… they know. At the end of the day, if you’re getting respect from the people who you respect that’s all that matters. Much more than the masses or the media. You can only get so big before you lose that intensity or that rage.”

How do you feel about punk’s assimilation into mainstream culture?

“I have mixed feelings about it. On one hand I think it’s a fucking joke, because it’s the total antithesis to everything that this music is meant to be about. I can only put it like this, CBGB’s is gone now. But there is murals outside of where it used to be. I was walking past this kickboxing class and you see these paintings of Sid [Vicious] and the Ramones and you think ‘This is fucking hilarious!’ Sid was a junkie and the Ramones were singing about huffing glue. And this is a block away from where you have this workout, boxing gym! This whole city has become a shrine and a memorial to what it no longer is at all. On the same block where there used to be lines of junkies, strung out coming out of a burnt out building, there is now people paying thousands of dollars a month to rent a studio apartment. It’s kind of like a mockery of the realness that it was back then, punk rock was supposed to die. Once it became pop, that was its undoing. But for the people who play the music, good for them, they deserve to make money from that music.”

How is your relationship with your former bandmates now?

“Sadly I don’t really have one. If it was up to me I’d like to get in a room with those guys, to play just one show or even just say ‘Hey, what’s up?’, but I don’t think that it will ever happen. John (Joseph, Cro-Mags frontman) has too much ego for that I think and Parris is just too bitter. But I can’t speak for any of them: I have more good memories of those guys than bad ones. I’m not taking that negative shit to my grave.”

Did your solo album, Cro-Mags, help you deal with some of those issues?

“Yeah, I got to release a lot of that shit in recording it. Maybe that’s why I’m more at peace. From 2012 to now I’ve come to peace with that. There’s a lot of anger and bitterness on that record, but the quarrel is over now as far as I’m concerned. It’s all on the album.”

“I’m a musician and an artist, the creative process for me hasn’t changed very much. It’s all real. My lyrics are the things that I feel and the things that I am going through. And the people that connect to that are usually going through the same thing. I just want to people to know that there was nothing about me that was fake. My legacy will always be that I was real. I’ve always been honest with my music and how I deal with people. I hope people learn something from my struggles and my experiences. I was as real as a mother fucker can be.”

Harley Flanagan’s solo album Cro-Mags is out now. His autobiography will be published in September by Feral House. You can pre-order the book here.