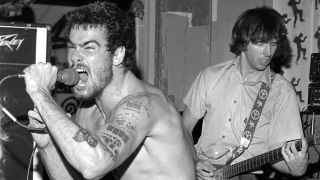 I wasn’t even a teenager at the time. I was skateboarding and taking part in a lot of competitions, stuff like that. I went to a contest in Jacksonville, Florida – it was the biggest of its time. I was obviously a huge fan of skateboarding, as well as a participant, and there were guys I was hugely intrigued by: Jay Adams, Tony Alva and this other guy called Duane Peters.

So I go to this contest and it was a week long. The organisers had places where they put the contestants up and they roomed me with Duane Peters. I’d never met the guy and he was probably like eight years older than me, something like that. I go to my room on the first day and Duane is just there and goes, ‘Hey, I’m Duane, I gotta listen to some music, is that cool?’ And I said, ‘Yeah, you do whatever you want. Sure.’ He goes, ‘Are you into punk?’ And I’m like, ‘What’s punk?’, because I’m only 11 years old, you know? He said, ‘It’s music, man. It’s a lifestyle…’

At that time, I hated music. When I was in Florida, music was a tool of my enemies. I hated anything that had to do with them: sport, music… whatever they did, I wanted no part of it. When I told Duane I hated music, he told me I had to check this album out. He had a boom-box. He puts in a cassette and the first thing I hear is just fucking screeching feedback. The lyrics for the song went, ‘This fucking city is run by pigs, they take the rights away from all the kids.’ Black Flag’s Police Story. It was like I saw God’s asshole. I said to Duane, ‘You can say that? This isn’t music. This is totally insane. It’s like violence. I feel like there’s a fight going on.’ It wasn’t even like music to me – but I loved it. I was addicted.

Black Flag’s 1981 debut album, ‘Damaged’ and right, skater Duane Peters on the cover of Thrasher magazine. He would later go on to front U.S. Bombs.

Where I lived in Florida was a swamp town. There was nothing there. No record stores. Nothing. But Duane gave me a punk magazine before I went home and wrote down all the names of bands which were cool. Bands like Black Flag and Necros. He gave me the address and number for SST Records [the label founded by Black Flag guitarist Greg Ginn] and I started writing to them. I called SST and talked to Chuck Dukowski, the bassist.

I’d send them a cheque and they would send me records, and all these posters, all kinds of rare shit. I did the same thing with Glenn Danzig and Ian MacKaye. I was pen pals with all of them. Chuck told me Black Flag were going to play Florida in a couple of months, so I told all my skateboarding buddies we had to go, because by this point, I’d turned all of them on to punk rock. They were all older than me and had cars, so we drove to Daytona Beach on the night Black Flag was going to play. We got there early, because it was 21 and over, and we had to figure out a way for me to get in. We arrived at the venue, and I went up to the van where I see Black Flag in the back. I saw Chuck and was like, ‘Hey man, I call SST all the time and order records.’ And Chuck said, ‘Hey man, I know you. You’re that Casey kid! Good to meet you, man.’ I said I didn’t know whether I was going to get in. He just gave me this look and told me not to worry.

I distinctly remember Black Flag walking on stage. They still were a five-piece at the time; that was their best line up to me. They started doing an instrumental which was so loud, I was totally mesmerised. That expression that you see on my face in the photo? I’m sure I looked like that the entire fucking show. Henry Rollins wasn’t on stage for this part, but then he came out, looking like Charles Manson. He looked fucking deranged. It was so intense for me as a child to see that. They were, hands down, one of the most important bands of all time. In that era, bands on stage would seem so far away. What I saw that night was so real, and so not rock ‘n’ roll in that fashionista way, that it changed my life. It changed my life. Henry handed me the microphone and I’d sing all of the words with him. And I was just like, ‘I’m in.’ And that’s the way it all began.

Casey in the front row at Black Flag’s Daytona show in 1982, and right, with Henry Rollins and Ian MacKaye

I would break a lot of bones skateboarding. So whenever I wasn’t skateboarding, I’d say to my friends, ‘Let’s go to the pawn shop and buy some instruments. I don’t care if we can’t play any of them. Let’s just make some noise, like Black Flag.’ Every time I got a broken arm or leg, or when it rained – which it did a lot in Florida – we’d get in the garage and we would jam.

That’s basically the run down. I recognised there was something I liked in the world again. I’d moved from New York, where I was connected to the lights and the ambition of life that was waiting out there for me to explore. And then I wound up in this fucking swamp. And I was stripped. Aside from my skateboarding buddies, I was really disconnected. But not after that show. That night changed me in a way that I’ll never, ever fully be aware of. It literally changed my life. It was just one show, and it changed the path of my life: where I was going, what I was going to do, who I was going to be. It created a shift in me, which is the beauty and the power of music – when it’s done correctly. Not the shit that fucking Kanye West and those other phonies who have nothing to give. With them it’s all, ‘Me, me, me! Take, take, take!’ They have nothing to give, man. But Black Flag gave it all.