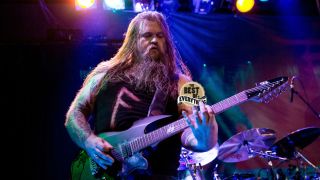 I remember hearing about Bathory from other people as I was getting into metal and extreme metal. This was probably around 1989 or 1990. At that point, I was mostly into death metal, like Autopsy and Carcass. But I kept hearing so much about Bathory. I’d heard a few songs at parties, and I really liked what I heard.

When I got some money from doing the chores at home, I went and bought Hammerheart on vinyl – basically because of the cover. That was the same month that we decided to start Enslaved. At that time, I was basically listening to Hammerheart 24-7. I guess it was the most important thing in my life at that point.

So from Hammerheart and Twilight of the Gods was how I got into Bathory, and I guess I backtracked from there to the earlier stuff, which I also love. But those two albums are particularly special because they also have this philosophical or esoteric resonance with me, in addition to the music. Those two albums were the foundation, really, of both Enslaved’s music and the ideas behind it.

Bathory mean a lot to me personally, and to Enslaved as well. These are my 10 favourite songs by the band…

Equimanthorn is a catchy one. It’s a fast, very war-like song from Under the Sign of the Black Mark, which is a great album. It’s a song that we covered a lot early on as well, so it’s one that I know quite well.

This song is from the first self-titled Bathory album, and it’s a total killer. The main riff has been very influential on us too. We have a song on an obscure EP that we released for free in the US called The Sleeping Gods [2011], which is called Alu Misyrki, and that’s pretty much a tribute to War by Bathory. It’s also a very important song for the first wave of Norwegian black metal and a lot of the bands that followed.

This is a very heavy song, and it’s got a very cool title. It’s also a good reflection of the thematic content of the whole album. If you had a psychological analysis of this kind of music, which is sort of extrovert in its suffering, it’s not gothic or self-hurting kind of music – it’s more positive than that. And there’s a sadistic streak in a lot of this kind of music, our own included.

Enter the Eternal Fire (Under the Sign of the Black Mark, 1987)

This song has one of the coolest mid-pace things going on in black metal. It’s such a heavy, groovy, atmospheric song. And I love playing the riff. I’m sure the guys get pretty sick of hearing it every time we soundcheck. But we played it at the Hole in the Sky festival a few years ago, and it was amazing.

Call from the Grave (Under the Sign of the Black Mark, 1987)

This is another song from the *Under the Sign of the Black Mark *album that I like. It’s just a little ahead of *Enter the Eternal Fire *because the main riff is just slightly heavier and cooler, and it was one of the first riffs that really made me catch on to the sinister vibe from black metal. Thematically it’s great as well, and it’s got a real horror vibe, but it’s more Klaus Kinski psychological horror than the usual Bathory death metal horror.

The ending to this song is maybe the most monumental thing in metal. I’ve been trying to think of something that’s more monumental than this, but I can’t think of anything. It creates such a strong imagery of battle, and not only in a role-playing kind of a way, but in a larger, more grandiose feeling of time and the past. It’s like [Leo] Tolstoy or [Fyodor] Dostoyevsky, and those writers who are able to make you think in really large pictures.

This is a great, really heavy song. I love the sound on this album. I know some people find it a little cheesy, but I really love the reverb-led bass sound across the whole thing. This song is special because of the lyrics as well. I guess it pinpoints the direction that a lot of our lyrics have gone. It’s not about revivalism or turning time back, or dressing up for cosplay! It’s about contrasting the values from the old days and now, and seeing that even though things have been gained and there’s been a lot of progress, there are also a lot of things being lost. It’s shedding new light on how materialism and globalism is causing a lot of loss and isolation in humans.

This is a very motivational song. It’s got a weird story and it can be interpreted in all kinds of ways, but for me I take it as literally a song about runes. Some people think it’s linked to soldiers in the Second World War, and if you look for stuff like that in Bathory’s music you’ll always find it, but I just choose to see the song about a person in the world who’s using runes for guidance and strength to find his way. Nevertheless, it’s a song that really inspires me.

This is the first song from Hammerheart. Every time I hear the opening riff with the water on the beach and all that stuff, I still get the chills and my blood starts boiling. It was like that when I was 10 and I first bought the vinyl, and it’s still like that now, 25 years later. It’s such a powerful song. And it’s clichéd to say, but if you wanted to condense the Viking metal feeling down to one thing, it would be this song. The appeal of Bathory for me is that all of their albums have a different sound and expression, and I take great joy in knowing that every time you hear a new Bathory album it’s going to be different and also killer.

This is such an important song for me identity wise, both in the music that’s inspired me over the years, and the lyrics. It’s not just about the relationship between a father and his son. It’s about tradition and living in diametrically different times, and feeling that tradition and connection with your ancestry all the way back. That’s something that’s really positive to me. It’s part of our human condition to want to feel that connection, and that’s the purpose of art – to make us feel, and gain a more intimate knowledge of life itself.