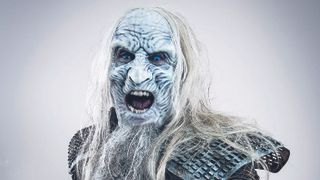 Winter is coming - and so is the final season of Game Of Thrones. One man is who will be unreasonably excited is Anthrax’s Scott Ian, a fully signed-up GoT nerd. So much so that he went behind the scenes of TV’s most-talked about show to find out just what it takes to transform into a fully-fledged White Walker – a process that involved him getting kitted out in full make up and costume. The results appeared on his Bloodworks podcast, which finds the guitarist diving deep into the world of horror movie make-up and special effects.

How did your Bloodworks project originally come about?

“A few years back The Walking Dead was airing and my agent called to tell me they were shooting a show where myself and Chris Hardwick [presenter of TWD talk show Talking Dead] were going to watch an episode, then talk about it and take calls from the audience. I was going to be a field reporter and get made up as a Walker and stuff, so we shot a pilot, but the network decided they didn’t want a field reporter. I wasn’t bummed because I didn’t know what Talking Dead was going to turn into, but Chris called and said, ‘How would you feel about doing a show like the one we recorded for my website, Nerdist?’ It sounded great! That became Bloodworks – we get to go to sets and see how everything plays out.”

What attracted you to cover Game Of Thrones?

“They let us in! The episode with The Walking Dead opened doors for us; people started to take the web series more seriously. I know one of the runners and had been to the set to hang out before, and I asked if we could get access to do the show with something from Game Of Thrones. The HBO people were in, and they let me shoot stuff on the set in Belfast just before I went on tour with Slayer last year. Now I’m here getting made up as a White Walker! It’s amazing, because these are arguably the two biggest shows on television… certainly in my house they are.”

Where does your fascination with prosthetics come from?

“I just love being able to look behind the scenes. I’ve been into movies and TV – and fascinated with learning how they make the effects in horror and fantasy – since I was a kid, whether it was Fangoria or Famous Monsters magazines. It’s not something I’ve ever wanted to do, but to see the artists do it is amazing – because they truly are artists. They make the effects that are so crucial to the movies I love, so to be a fly on the wall is incredible.”

How does it change you when you’re in the prosthetics?

“Oh, I love it. It’s really cool to be able to become someone else, especially if I get to be a part of something, where you quote-unquote ‘act’. I’m not an actor, so this is like Halloween coming around every day, man. Who wouldn’t want to do that?”

Why do you think these shows have such a crossover with the world of metal?

“I think with Game Of Thrones it’s obvious that, before Anthrax were even a band, you had the ideology of this type of thing coming from a guy like Dio. Black Sabbath wrote tons about that stuff. Robert Plant was writing lyrics from The Lord Of The Rings! I think the dark themes of fantasy and adventure just go hand in hand with the sound of heavier music. I mean, who wasn’t into Lord Of The Rings? We’re just following in the footsteps of our predecessors.”

What’s your dream costume to wear?

“I’ve done them! Game Of Thrones and The Walking Dead would be the two. Although if I could be some sort of monster in one of the next Star Wars films, that’d be the dream ticket!”

Listen to Bloodworks at Nerdist.com. The final season of Game Of Thrones starts on April 14