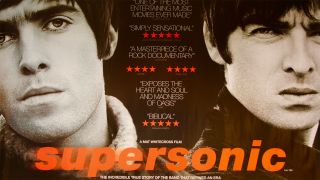 The folk at Amazon don't just sell almost everything under the sun, they have their very own streaming service! Just like Netflix, Amazon Prime Video offers thousands of hours of TV and film at the touch of a button, including a wealth of documentaries for music lovers. Here we have listed the 10 best music docs on Amazon Prime US. Watch them all.

Heading back to the 1990s when two brothers from Manchester were the biggest rock stars in the world, Supersonic engulfs you in Britpop nostalgia. Stripping away the furore that surrounded Oasis, the Gallagher brothers and their cohorts come across as cocksure but sincere while the likes of Wonderwall took over the airwaves.

A headlong dive into the riotous history of The Stooges, Gimme Danger does exactly what it says on the tin. Unsurprisingly Iggy Pop steals the show throughout (through interviews or live footage), while his bandmates chart the confrontational and influential rise of the band through the late 1960s and early 70s.

Rumble: The Indians Who Rocked The World (2017)

From Link Wray and Howlin' Wolf to Randie Castillo and Testament, Native Americans have made a sizeable impact on contemporary music, as this documentary proudly reveals. Huge stars such as Steve Tyler and Tony Bennett reveal the artists that inspired them and ask why the indigenous heritage of the likes of Jimi Hendrix wasn't discussed.

Arguably doing more to end the Cold War than Rocky IV, rock music's sense of freedom was seen to literally break down walls behind the Iron Curtain. With world leaders being interviewed as well as musicians, this important film shows how music still has the power to bring about change.

A glimpse into the mercurial talent and somewhat difficult character of Chuck Schuldiner through interviews with former bandmates and family, as well as archive testimonies of the man itself. Not only does it reveal the band's history but the early evolution of extreme music in the US.

Focussing on the burgeoning hardcore punk scene of the early 1980s, the grainy footage of sweaty clubs turned into maelstroms makes this doc more vital than the book it's based on, while interviews with the likes of Henry Rollins and Ian MacKaye chronicle the rise of the bands across the country.

Pioneering vocalist, positive preacher and spiritual teacher, HR from hardcore trailblazers Bad Brains is all these things and more – as you will see in this film. While he's showered with praise, others aren't afraid to address their concerns, presenting a balanced view of this enigmatic figure.