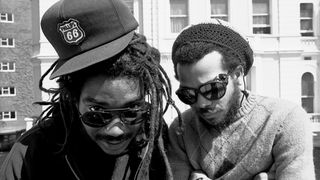 Imagine our surprise when the Bad Brains were recently nominated for the Rock ‘N’ Roll Hall Of Fame. Not that they don’t deserve the nomination, of course, having influenced the likes of Clutch, Soundgarden, Nirvana, Fishbone, Deftones, Rage Against The Machine, Faith No More, and the Beastie Boys, to name just a few. It’s just the Hall Of Fame has a habit of overlooking such monumental bands, and while, admittedly, the accolade comes about 20 years too late, it’s better late than never.

Formed in 1976 as a jazz fusion band called Mind Power, the four young Rastafarians – vocalist HR, guitarist Dr Know, bassist Darryl Jenifer, and drummer Earl Hudson – quickly discovered punk rock, changing their names to the Bad Brains after the Ramones song Bad Brain, and going on to change to face of music by mixing breakneck punk with reggae, not to mention playing incendiary live shows that have become the stuff of legend. To celebrate this, and perhaps enlighten those who don’t know what made them so special, here, after much agonising, are the top ten Bad Brains tunes.

The Bad Brains history has been nothing if not turbulent, but while, obviously, the classic line-up features HR on vocals, the singer has been replaced several times throughout their career, notably by former Faith No More frontman Chuck Mosley, and here by Israel Joseph I, with whom they recorded their major label debut in 1993. The title track of that album, Rise is a call to arms that is worthy of recognition.

Released in 1989 the Bad Brains Quickness album was a hit and miss affair, not least for the awful homophobic nonsense spouted on Don’t Blow Bubbles, but that’s not to say the record didn’t have it’s great moments. Gene Machine/Don’t Bother Me is one of them. Essentially two tunes in one if goes back and forth from blistering hardcore punk to crunching metal, and even takes a brief detour into reggae. All this in two and a half minutes!

Rounding off side one of 1983’s Rock For Light album we find this sublime reggae track following straight after a raging punk tune called Riot Squad. Bad Brains did this kinda thing a lot, changing pace and direction with almost alarming alacrity, able to switch between genres at the flick of a switch. In keeping with their religious beliefs, The Meek is a call for unity and peace.

In all honesty we could have included every track from the Bad Brains second album in our top ten, and still had half a dozen classics left over. Indeed the self-titled debut, released on cassette only, featured many of the same songs, which kinda makes Rock For Light the debut. Either way, it’s an astonishing record, and was named by Kurt Cobain among his top fifty of all time. Just buy it.

The title track of their third studio album, I Against I takes it’s title from the Rastafarian phrase I And I, and later lent it’s name to a punk band from the Netherlands, of all places. Another furiously paced tune, it finds the band rallying against an uncaring society where “everybody’s only in it for themselves.” Also of note on the album is Sacred Love, which HR sang down the phone from prison after getting busted for marijuana distribution.

Another reggae number sandwiched between brutal punk songs, The Youth Are Getting Restless is best known as the title track of a live album recorded in Amsterdam in 1987, where you’ll hear it following the manic Let Me Help and preceding Banned From DC. The lyrics, written several years before the end of apartheid, are self-explanatory: ‘Black Africa, white Africa, it’s time for revolution!’

Long before Rage Against The Machine’s iconic ‘Fuck you I won’t do what you tell me!’, the Bad Brains sang an equally defiant refrain with ‘We will not do what they want or do what they say!’. Granted, most people didn’t have a clue what the rest of the lyrics were about (and still don’t, if we’re honest), but there’s no questioning the intent.

As the title suggests, Bad Brains were (unofficially) banned from their home-town, Washington DC, and relocated to New York City in 1979, where they became a massive influence on the the burgeoning punk scene, and hardcore in particular. Also the title of a book about the DC punk scene, Banned In DC finds them wearing the ban as a badge of honour, and pointing out that there’s “a thousand more places to go.”

Released in 1980 on their own Bad Brains records, the bands’ debut single clocked in at just one minute and 33 seconds long, and seemingly had aspirations of breaking some sort of land-speed record. Even today you’d be hard pushed to find a faster song or indeed read the lyrics as fast as HR spits them out. A classic in every sense.