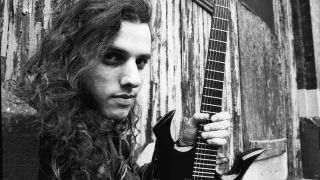 Chuck Schuldiner never wanted to be The Godfather Of Death Metal. It was a genre tag he could never shake off during his short life, and one that’s only grown in stature in the years since he passed away.

His reticence was understandable. Chuck’s band, Death, were conceived in the 1980s as a brutal eruption of noise and viscera, but the course they sailed across their seven-album lifetime took them into uncharted waters. As their singer, guitarist and chief architect, he was one of extreme metal’s iconic figures, a restless spirit in perpetual forward motion.

“Death were so far ahead of the curve that other people were playing catch-up,” says Matt Heafy, Trivium vocalist and Death fan. “Chuck was so ahead of his time that it became a hindrance. If Death were still around, they’d be massive.”

He hasn’t been forgotten, but neither is his influence as celebrated today as it should be. With Chuck at the helm, Death produced some of the 90s’ most game-changing extreme music. They married the brutal and the progressive, the blood-splattered and the cerebral. His tenacity in the face of adversity – from line-up issues to changing musical trends to the cancer that eventually killed him – was astounding. But if there’s one thing he wasn’t, it’s a self-publicist.

“He always downplayed his part in the extreme metal puzzle,” says Eric Greif, who managed Chuck through Death and beyond. “He never claimed that he created anything – he just thought his music was metal, plain and simple. He’d never admit it, but he was a visionary.”

It’s debatable whether Death were the first death metal band, but it was a close-run thing. San Francisco’s Possessed edged them out with their 1983 demo, tellingly titled Death Metal. But Possessed crashed and burned within a few years, whereas Chuck persevered with the vision he’d had as a teenager growing up in Orlando, Florida.

Original Death guitarist Rick Rozz first met Chuck at a backyard party in the Sunshine State. “He was a pretty mellow, laidback guy,” says Rozz today. “Me and Kam [Lee, drummer] had our band Mantas going, and we started talking to Chuck about music. We were only 16, but within a couple of weeks we’d moved our stuff over to his place and dropped out of high school.”

Inspired by the nascent thrash metal scene, the trio changed their band’s name from Mantas to Death, reflecting their fondness for schlocky horror movies filled with blood, guts and zombies – something Chuck would draw upon for Death’s first two albums. He christened himself ‘Evil Chuck’. “There was no death metal scene in Florida at all,” says Rick. “Obituary weren’t together, Morbid Angel weren’t together, Deicide weren’t together. It was just us at that point.”

Eric Greif met Chuck in 1987 at the inaugural Milwaukee Metal Fest. Death’s groundbreaking debut album, Scream Bloody Gore, had been released that year. A rush of gargled noise, it drew up the template for the underground metal scene grinding into life in the Florida heat. But watching Death play live in Milwaukee, Eric saw the gleam of potential behind the volume and filth.

“I had never been exposed to anything as ferocious as his vocals,” says Eric. “In 1987, Tom Araya was considered the heaviest vocalist around. Then Chuck – this handsome-looking guy – stepped onstage, opened his mouth and Satan came out. But offstage he was the opposite of that. He was polite, charismatic, kind of like a character from a Southern TV show: ‘How you doing, y’all?’, that kind of thing.”

Death were only a few years old at that point, but they’d already had several personnel changes – something that would define them for the rest of their career. The original line-up had fallen apart in 1986, after Chuck briefly joined Canadian thrashers Slaughter, though Rick Rozz rejoined for Death’s second album, Leprosy. The upheaval reached a nadir in 1990, when an exhausted Chuck bailed on a European tour, leaving his aggrieved bandmates to play the dates without him (it was unofficially dubbed the ‘Fuck Chuck’ tour, to the frontman’s ire).

“Although it was a band set-up, it was clear that Chuck was the boss,” says Eric, whose own relationship with Chuck had its bumps. “Me and Chuck sued each other at one point around the time of [Death’s third album] Spiritual Healing, then we had another break a couple of years later. Our lawyers rectified everything, and we were good from then on.”

Unlike many of his death metal contemporaries, Chuck was a complex person. By the time Death released 1990’s Spiritual Healing, he was already beginning to outgrow the scene he had helped spawn. That album marked the point where he largely jettisoned the adolescent lyrical concerns of Scream Bloody Gore and its follow-up, Leprosy, in favour of a deeper, though no less vivid look at the human condition.

“He started out striving for what everyone was striving for at the time – horror and gore and brutality,” says Eric. “He was a kid, he loved those kinds of things. But he eventually started to find the brutality in everyday life.”

An even bigger leap came between Spiritual Healing and Death’s next album, 1991’s Human. While it was still anchored in extreme metal, it found Chuck taking the band down new avenues of complexity. For Human, he recruited guitarist Paul Masvidal and drummer Sean Reinert of tech-death visionaries Cynic, and Sadus’s fretless bass maestro Steve DiGiorgio – a line-up that represented the cutting edge of early 90s metal.

“Chuck grew in an extraordinary way as a musician and a lyricist from album to album,” says Eric. “He was going through lots of personal turmoil – relationships with girlfriends falling apart, issues with his parents getting divorced, doubting his own abilities. In a lot of ways Death was cathartic for him. Certainly when we were suing each other, he’d call me up and say in an angry voice, ‘I just wanna let you know that I wrote another song about you.’”

Death’s great leaps forward continued through the 90s. The one-two of 1993’s Individual Thought Patterns and 1995’s Symbolic (the latter arguably their finest album) were increasingly complex and forward-looking.

“The way he approached things was so unorthodox,” says Matt Heafy. “He’d treat the guitar like a flamenco player. There aren’t a lot of bands where you can hear the guitarist play a riff and identify them right away. Zakk Wylde, Dimebag, James Hetfield. And you definitely can with Chuck.”

Despite the acclaim that greeted successive Death albums, the 90s were a tough time. Metal was on the back foot, sucker-punched by grunge. The likes of Pantera and White Zombie were keeping the flag flying for metal, but for a band further out on the fringes it was hard.

1998’s The Sound Of Perseverance was Death’s  final album – and Chuck’s last as a vocalist. Within a year he had ditched the name and launched a new band, Control Denied. Most of the final Death line-up came with him, but there was one key difference: Chuck would focus on playing the guitar, bringing in newcomer Tim Aymar to sing.

With its intricate songs and Tim’s leather-lunged vocals, the band’s debut album, The Fragile Art Of Existence, veered closer to progressive metal titans Dream Theater than the extreme metal bands that had risen in Death’s wake. Sadly, the album’s title proved horribly prophetic. In 1999, the same year it was released, Chuck Schuldiner was diagnosed with brain stem cancer. “He chose to fight,” says Eric. “His sister took him from doctor to doctor.”

When it became apparent that the Schuldiner family couldn’t afford to pay for treatment, fans raised tens of thousands of dollars to help pay his medical bills. In January 2000, Chuck underwent a life-saving operation.

“I ran into him at a bar, after his first round of surgery,” says Rick Rozz. “He didn’t look good; he was dragging his leg behind him. We spent a good three or four hours just sitting around talking. It was cool to see the guy.”

For a while, it looked like the treatment had been a success. “He was in remission and everyone thought he was going to survive,” says Eric. “But then he took a turn for the worse.”

In May 2001, Chuck’s family announced that the disease had returned. The metal community rallied round him once again. Heavyweight acts such as Korn, Marilyn Manson and the Red Hot Chili Peppers donated memorabilia for an auction to help fund his medical bills. Trivium, who had formed just a couple of years earlier, played a fundraising show at the Fairbanks Inn in Orlando. “It was just local bands, but it was an honour to be able to do it,” says Matt Heafy, who grew up just a few miles from where Chuck co-founded Death all those years ago.

Sadly, it was to no avail. On December 13, 2001, Chuck died, aged 34. “He fought all the way,” says Eric, who helped organise a memorial service that was attended by Corey Taylor, HIM’s Ville Valo, Dave Grohl and more. Tellingly, despite the occasionally fractious history they had had with their former bandmate, every former member of Death also turned up.

“Even though he seemed to have falling-outs with the musicians in his bands, people at his labels, everyone respected him,” says Eric. “Even after all this time, people don’t bring up horror stories about working with him.”

Chuck had started work on a second Control Denied album before his death. Despite fans’ clamour for it to be released, Eric – who was appointed by the Schuldiner family to look after Chuck’s musical legacy – insists that the record was barely even begun when he died.

“It never got beyond the simplest demos,” says Eric. “He was physically unable to play even the simplest riffs. Finishing it posthumously is nearly impossible. You can’t just snap your fingers and expect people to know what Chuck would have wanted.”

Even without it, Chuck left a stellar legacy. The eight albums he released during his lifetime were a personal evolution that mirrored metal’s own evolution. Today, his legacy can be heard in everyone from Volbeat to next-gen metal torch-bearers Venom Prison. Almost 20 years after his death, the reluctant Godfather Of Death Metal remains as important and influential as ever.

“I meet kids who don’t know their roots, their history,” says Matt Heafy. “They don’t know it, but when they’re listening to their favourite band, they’re hearing Death in there.”