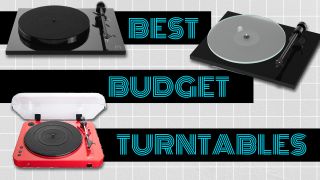 Streaming music is great, but there’s a certain coldness to digital music files, and that’s just not good enough for those all time classics or epic new rock anthems. They demand to be enjoyed in a much warmer way, and that way is with vinyl. For those of you on a tight budget, that means seeking out one of the best budget turntables money can buy to play your treasured vinyl on.

Nothing will get the best out of your favourite albums like a record player, and if you’ve been put off from investing by the cost and complexity, you can rest easy knowing that an ace, modern turntable can be yours for well under £300.

But more than that, setting up a turntable is getting simpler by the year. What’s more, many of the new-breed of budget turntables have Bluetooth and USB-connectivity as standard to give your listening sessions even more of a pleasure.

There are really two ways you can go here, depending on how much effort you’re willing to make for that glorious, analogue audio. If it’s ‘not very much’, the best budget turntable for you is the Sony PS-HX500. This one boasts a built-in phono stage and a first-time set-up that’s an absolute breeze. What’s more, it can rip your records to a connected computer in glorious hi-res audio formats.

The Sony sounds great for a cheap turntable with so many features, but if you’re prepared to go the extra mile, it is possible to get even better sound for similar money. The Rega Planar 1 is the ultimate budget deck overall in this list.

It’s pretty straightforward to set-up, but it doesn’t have a built-in phono stage so you’ll have to budget for an external one or find a stereo amp that has one. It’s really, truly worth the investment, though.

Choosing the best budget turntable for you

So, what should you look for in a budget turntable? It might sound like an obvious statement, but sound quality is the biggest priority by far. If you don’t care about sound quality, why on earth are you considering buying a record player?

While no company has a perfect record in this arena, sticking to the established, well respected brands is a very good start – a turntable is a very specialised, precise and delicate bit of kit, after all.

These days, the most consistent name in turntables, let alone the best budget turntables, has to be UK company Rega. Rega hasn’t produced a duff model in as long as we can remember. Austrian brand Pro-Ject has an fantastic range, too, while Sony and Audio-Technica are particularly good at marrying true hi-fi audio quality with more modern features such as Bluetooth and USB recording. If it's tech you want, these are the brands to consider.

Speaking of which, put a good deal of thought into whether you’ll actually use features such as those. Sure it’s nice to have options, but you don’t want to pay for gadgetry that you’re not going to use, and the tech-iest turntable is almost never the one that sounds the best.

If you’re boarding the vinyl bandwagon for the very first time, you'll need to familiarise yourself with some key components, particularly the phono stage. This is essentially a step-up amplifier (often referred to as phono amps) that increases the tiny output of a record player to a level that a standard stereo amplifier can work with. Many turntables, even those in our best budget turntables list below, have a phono stage built-in, as do some stereo amplifiers.

Generally speaking, though, a phono-less turntable that goes through an external phono stage before getting to the amplifier will sound best, so consider going down that route if you’re serious about audio quality. The best phono stage at this end of the market is undoubtedly the Rega Fono Mini A2D which will set you back around £90.

Do bear in mind that setting up a turntable can be a fiddly operation, with components that need fitting and careful adjustment, but some are simpler than others. Some also have automatic functionality to lighten your load.

For many people, a little initial tweaking and manual operation are keys to the charm of turntable ownership, and the simplest decks are often the best-sounding.

On paper, the Sony PS-HX500’s big selling point is that you can use it to rip your records – in hi-res, no less. That’s useful, sure, but the top reasons to buy it are that it’s exceedingly simple to set-up, has a built-in phono stage and, for a feature king, it sounds great.

This is one of the best budget turntables for making the most of your cherished vinyl by playing and even recording it (just plug in your Mac or PC and download Sony’s bespoke software) with all of its detail, clarity and texture intact.

But this Sony turntable doesn’t require a degree in audio engineering to set-up and you don’t need to buy a phono stage on top. It’s the perfect choice for the first-timer determined to take vinyl seriously.

Simply the best budget turntable if sound matters most

If you want fancy features such as Bluetooth and USB recording, this Rega isn’t for you. Heck, it’s one of the only turntables here that doesn’t have a built-in phono stage, which means you’ll need an amplifier that’s got one or will need to budget for an external unit.

But it is the best-sounding turntable available for this sort of money. If you want to hear your just-bought or much-cherished records just as intended, the Rega is how you do it.

And don’t go thinking this is a cold, complicated deck. On the contrary, it produces a really fun sound and is pretty straightforward to set-up. If you’re prepared to be just a bit adventurous, this is the deck to buy.

Automatic for the people

Those suitcase turntables you see all over Amazon, Argos and even Urban Outfitters are designed to bridge the gap between vinyl enthusiasm and analogue actuality by building everything in and making it as hands-off as possible.

But here’s the thing: those suitcase turntables sound bloody awful, and unless you’re boarding the vinyl train for entirely hipster reasons (as a Louder reader we certainly hope that’s not the case), you simply must do better.

Better is the Audio-Technica AT-LP3, which has a completely automatic action (start the record at the touch of a button and finish it without lifting a finger) but sounds downright excellent for the money, with a balanced, natural sound that doesn’t mask your tune of choice.

The best budget Bluetooth turntable you can buy

If you’re looking to marry old-school hi-fi with new-school cool, this Sony is the turntable for you. The big draw is Bluetooth, which you can use to send that rich, analogue audio via the digital, wireless domain to a pair of Bluetooth headphones or a wireless speaker. Wires? In the bin.

On top of that the tonearm action is automatic, so the needle will find your record’s groove via a button-press and will extricate itself at the end with no intervention necessary.

Crucially, the PS-LX310BT also sounds great. Detailed, punchy and direct, this is a deck that reveals the details lurking in the depths of those black disks and brings them to the surface in fun, bubbly fashion.

A plastic-free record player with a big dollop of bass; ideal for rock

If you’re keen that your affordable turntable has a premium look and feel, the new Pro-ject T1 could be the one for you. This entirely plastic-free deck is brilliantly solid and weighty, and it comes more or less ready to rock - you need only place the platter and belt yourself.

The T1 is light on fancy features - there’s no Bluetooth or USB recording, and you’ll need to add a phono stage - but that’s because sound quality has been prioritised.

While the Rega Planar 1 is the no-frills deck to choose for sheer clarity and detail, this Pro-ject counters with a smoother, weightier, bassier sound that will suit a lot of the rock and metal vinyl you’ll be spinning.

It looks like a kid’s toy – and is almost as cheap – but the Lenco L-85 is actually a semi-automatic, belt-driven turntable with a built-in phono stage and the ability to record via USB. It’s as plug-and-play as vinyl gets.

It's old school enough – it comes with a pair of RCA cables so you can plug the L-85 into your stereo amplifier and get started straight away – but it's 21st century enough too: a USB port means you can convert your vinyl into MP3 files.

A great starting point for anyone who's just getting into vinyl or digging out their old records from the garage.

A chic record player from the audio masters

The Denon would make a gorgeous addition to your setup, and its sound is detailed and airy, with an automatic start/stop feature that means your needle won’t be worn down at the end of the record.

There’s no USB output, but do you really need one when almost every song you ever wanted is on Spotify or Apple Music? All in all, the Denon DP-300F is a great looking turntable from an established, tried and trusted name in the industry.

A winning combination of looks, features and sound

You’ve probably never heard of Fluance, but this Canadian brand has been quietly making a name for itself in hi-fi and home cinema circles and has produced, in the RT81, a mighty fine first turntable.

More or less ready to go out of the box, this lovely looking deck takes the stress out of first-time set-up and has an integrated phono stage that means you can plug it straight into your standard amp.

It sounds really good, too: solid, weighty and punchy. Perfect for a sport of hard rock. The only tiny issue is that, while the record automatically stops spinning at the end, the tonearm needs to be manually returned to its resting position. Oh, the humanity!

A funky budget turntable that's so easy to setup

Pro-Ject is a relative newcomer to the field. They started out as vinyl sales seemed to be on a terminal slide but carved out quite a reputation in the last 20 years as vinyl itself has made its comeback.

Pro-Ject have two budget turntables priced below this – the Elemental (£150) and Primary (£190) – but calls the £240 Essential III its “first true hi-fi offering”. It may be made out of MDF but it doesn't look or play like a ‘budget deck’ – and you can even upgrade it...

The Essential III A turntable comes with an acrylic platter upgrade (called the Pro-Ject Acryl-IT E) for an extra £40 – and it's money well spent.

It might look like a DJ’s deck, but this long-running turntable actually has a lot to offer the at-home listener, including a clean, solid sound, integrated phono stage and USB recording.

It’s without doubt one of the best budget turntables you can buy on account of it’s super-simple, beginner-friendly setup - it’s even direct driven, so there’s no belt to faff around with - and you won’t likely feel obliged to change it in any hurry.

It’s also the only turntable on this list that’s able to play 78s, which is handy if you want to dabble in collecting old jazz records.

About the author
Tom Parsons is a music and film fan who's been testing audio kit of all varieties for around 13 years, most of those at What Hi-Fi? He also loves rock and metal and is a particularly big fan of Coheed and Cambria.