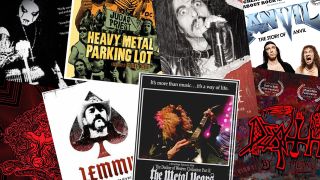 With many countries on lockdown and a growing toll of gig and festival casualties, it's advisable to self-isolate and minimise any activities that could put you in contact with, well... other humans.

To some, this might sound like a dream come true. Two weeks of unadulterated bliss. No pressure to leave your safe, cosy little cocoon of germ-free bliss.

But to others – those who thrive off of socialising, extroverts and anyone who had a gig or festival planned in the next couple months – it can be a pretty daunting thought. How do you keep yourself entertained without going stir-crazy?

Well, we've done our best to help ward off the isolation anxieties by tirelessly flicking through online streaming services and picking out the best metal documentaries available to watch now on Amazon Prime, Netflix and YouTube.

So spend your time wisely and swot up on your heavy metal history knowledge.

Disclaimer: This list is based on UK availability, some of these titles may not be available in your country. Check a search engine like justwatch.com to find out where you can stream them.

Billed as the United States' answer to Black Sabbath, this is the story of Pentagram – or, more accurately, Pentagram mastermind Bobby Liebling.

The documentary follows Liebling's attempt to record a new Pentagram record and take the band back on the road with the help of his manager, Sean "Pellet" Pelletier, after spending most of his life addicted to crack and living in his parents' basement.

It's a poignant, often heartbreaking, but ultimately triumphant tale of an ageing musician who, after decades spent struggling with addition, manages to get his life (and band) somewhat back in shape.

Considering the influence of virtuoso Chuck Schuldiner and his seminal band Death, there's a surprising lack of documentary material about reluctant 'Godfather of death metal'.

It's about time then, that Schuldiner is given the tribute he so deserves. Death By Metal paints a portrait of the late guitarist's life and career through interviews with former bandmates and family, as well as archive testimonies of the man itself.

The result is the raw and honest story of a passionate, driven and often difficult visionary whose life might have been cut tragically short, but whose legacy has made him immortal.

Get Thrashed!: The Story of Thrash Metal

Featuring the likes of Metallica's Lars Ulrich, Death Angel, Anthrax's Frank Bello, Dave Mustaine and Godsmack's Sully Erna, Get Thrashed! is the story of thrash metal from the people involved in the scene, tracing the subgenre from its humble beginnings in the 1980s to a worldwide phenomenon by the 1990s.

The Decline of Western Civilization: Part II - The Metal Years (1988)

The follow up to Penelope Spheeris' 1981 seminal chronicle of LA punk, The Metal Years does exactly what it says on the pack. Spheeris has turned her attention to the struggling up-and-coming musicians of LA once again, but this time it's at the height of glam metal. Aside from these unsigned acts, the film also documents the extent of heavy metal excess through interviews with the likes of W.A.S.P., Paul Stanley, Aerosmith, Lemmy and Ozzy Osbourne.

Based on Steven Blush's book American Hardcore: A Tribal History, is packed full of rare grainy footage from California's sweaty urban dives back in the late-80s. Witness Black Flag, Bad Brains, Minor Threat and the Dead Kennedys tear up the rockstar rulebooks alongside interviews with all the major players, including Henry Rollins and Ian MacKaye.

Until The Light Takes Us

It chronicles the the history of Norwegian black metal, its aesthetics and ideologies through shocking, unfiltered conversations with some of the scene's biggest names. The ever lovable Fenriz, however, comes across like a boss.

Soaring Highs and Brutal Lows: The Voices of Women in Metal

Eight female vocalists, one male-dominated music scene. Soaring Highs and Brutal Lows tracks the history of women in heavy metal. Doro, Floor Jansen of Nightwish and Alissa White-Gluz of Arch Enemy are just three of the incredible women interviewed who offer a compelling insight into the life of a female singer in music's heaviest genre.

Three die hard black metal fans from across the globe pilgrimage to the home of their beloved subgenre: Norway. Blackhearts follows Sina from Iran, Hector from Columbia and Kaidais from Greece as they make this unholy journey to the country that spawned the music that has shaped their entire lives.

Filmed over a decade ago, Lemmy is an intimate portrait of the life of the late Motorhead frontman Ian Fraser Kilmister – warts and all. The beloved rock'n'roll hero is seen spending his days at L.A.'s Rainbow Bar and Grill (when he's not on tour), and hanging with his son in his unassuming apartment. Interviews with his former bandmates, peers and admirers (including Slash, Ozzy, Nikki Sixx and James Hetfield) help paint a well-rounded picture of this straight-talking legend.

Filmed during one of the most turbulent periods in the band’s history, Some Kind of Monster provides a captivating insight into a Metallica on the brink of implosion.

Comprised of studio and fragmented concert footage between 2002 and 2004, this two plus hour long documentary, fraught with turmoil, lawsuits, and creative struggles acts as a fly on the wall for a band forced (as a result of sobriety) to work through decades of pent up issues previously suppressed by substance abuse.

This rollercoaster of emotions would prove a necessary catharsis and an unexpected future for the most successful heavy metal band of all time.

Anvil! The Story Of Anvil

Dubbed the greatest movie ever made about rock and roll, the story of Anvil follows two lifelong friends and musicians, that never really made it, on their journey into heavy metal stardom.

A hilarious and moving masterpiece depicting the not so glamorous side of fame that many of today’s bands worth their salt can relate to - the grotty club shows, difficult relationships and logistical nightmares that can plague an artist’s existence are all captured in a heartfelt and inspiring way that will have you rooting for metal’s greatest underdogs.

Anvil really are the life Spinal Tap and their tenacity and sheer will to make their dream into a reality is a testament to us all for never giving up hope.

You could be forgiven for never having heard of Michael Alago, a metal-obsessed kid from Puerto Rico, as the title says it all. But as it turns out, his name is one we all should know. This enthusiastic South American metalhead ended up signing an unknown bunch of thrash metal drunks from San Francisco called Metallica and working with some of the biggest names in rock.

Filmed at a Maryland concert arena parking lot during a Judas Priest concert, Heavy Metal Parking Lot has become a cult phenomenon. While Decline is about the stars of the scene, Parking Lot is all about the fans. Its mid-80s metalheads in their element, we're talking double denim, plenty of Aqua Net, mullets, spandex, muscle cars and more.

Everything moves slower in the South, and that includes the metal – but that as sure as hell don't make it any less heavy. Slow Southern Steel is a chronicle of the rise of the dirty, deep, sludge of the South featuring interviews with the likes of Phil Anselmo, members of Alabama Thunderpussy, EyeHateGod, Down, Black Tusk and more.

Such Hawks Such Hounds: Scenes from the American Hard Rock Underground traces the rise of the stoner, doom, desert and sludge subgenres of metal in the USA, from Pentagram to Kyuss to SUNN O))). Warning: This one might inspire you to start smoking grass...

No Netflix? Start a free trial today
Netflix is your gateway to endless TV shows, music documentaries and epic movies like The Dirt – perfect for those gig-less evenings. Sign up today and enjoy a free trial.View Deal

Start streaming with Amazon Prime Video
Stream and rent the biggest and baddest shows and movies around. Sign up to Amazon Prime today and get access to all this good stuff and more.View Deal