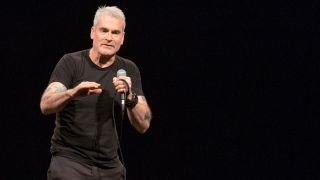 The former Black Flag frontman and spoken word performer says that listening to Foreigner and Twisted Sister at Hellfest play their greatest hits last month left him wondering why any artist would want to play old classics for the sake of crowd-pleasing nostalgia.

In his LA Weekly column, Rollins says: “A lot of bands do these blasts from the past. It is the band’s total submission to the will of the fan.

“The customers get what they want and can leave with a feeling of fulfilment and having been duly served. The rock stars get the adulation, proceeds and whatever else falls into their enclosure.

“I think it’s safe to say that there are many motives for why groups do this. The most frequently reached conclusion is that it’s for money, and perhaps that’s the biggest one.

“I just think the past is sad. It holds all your failures, humiliations and unrecoverable victories. The future offers opportunities to improve, so why wouldn’t you run at it with all speed?”

Rollins continues: “A mega rock star once explained to me why he sings 40-year-old songs at every show. He said it was his job to make people happy and to give them a good time.

“He then asked if that wasn’t the reason I performed – and he was confused when I said that the idea of making people happy had never occurred to me as a job descriptor.”

Rollins also insists that, if a band worked hard enough in their glory days, it should be all but impossible to make a comeback down the line.

He adds: “I believe in pushing artistic situations into distortion, exhaustion, collapse and eventual extinction, to where the only thing left besides the recorded or photographic evidence is legend, tall tale and flat-out lies. In this scenario, there is no ‘getting the band back together’ without it being awful, because you burned every synapse and ruined all relationships the first time.

“I think if you do it right, it cannot be done again. There should be nothing to come back to but ruin, hostility and the threat of litigation.”

Henry Rollins has scheduled a number of performances in Europe, New Zealand and Australia over the coming months.