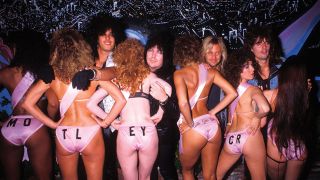 Walking down Los Angeles’ Sunset Strip now, as the milky winter daylight casts spectral fingers across the low, flat rooftops and the constant stream of cars snake their way west, you’ll notice the sidewalks are quiet.

If you want to get even the remotest hint of rock’n’roll in your veins, then it’s a long walk to the far end of Sunset where the squat Rainbow Bar & Grill building still sits. Lemmy is set in effigy at the end of the bar where he once spent so many happy hours drinking and playing the slots.

Walk through the bar and into the dark red restaurant, letting your eyes adjust to the low light. It’s so quiet in here now, but in 1987, infamous bands like Guns N’ Roses and Mötley Crüe partied here, drinking beer and whisky and eating slices of pizza as their female friends disappeared beneath the large, round table tops to kneel before them.

Occasionally, a stray, stilettoed shoe sticking out from under the long tablecloth would topple an unsuspecting waiter as he passed by, and the band’s raucous laughter would follow him down.

“Slash was a friend and we sat down with Guns N’ Roses to discuss them doing the film, so I was pretty sure they would be the closing band in the movie,” recalls director Penelope Spheeris today.

The film was The Decline of Western Civilization Part II: The Metal Years, the second (as the title implies) in a trilogy of films that Penelope helmed through the 80s and 90s charting Los Angeles’ cultural underbelly.

Part I (1981) focused on Hollywood’s then-burgeoning punk scene, and 1998’s Part III (arguably the strongest of the three) looked at the hardcore scene growing up around the droves of homeless kids living on the margins of society in and around Hollywood.

It’s Part II, however, that has gone down in infamy. Released in 1988, the film shone an unblinking light on the clubs and bands that were making a noise in the glam metal scene that engulfed the Strip in 1987 and 1988.

Throw a can of Aqua Net around in those days and you would hit at least half a dozen singers with backcombed hair and a ‘z’ or an ‘x’ in their name just waiting for that elusive big break.

And even though Guns N’ Roses did have a singer with an ‘x’ in his name, the band eventually declined to take part in the movie. “I met with their manager the day before we were supposed to shoot their performance and for some still-inexplicable reason, he backed out,” says Penelope with a sigh, speaking on the phone from Los Angeles. “That was very disheartening for me. I loved their music and I knew they were going to blow up.

“I distinctly remember, I wanted W.A.S.P. and Guns N’ Roses. I don’t recall exactly why Blackie [Lawless] didn’t want to be in the movie, but I do recall as a second choice I went for [then-W.A.S.P. guitarist] Chris Holmes and for obvious reasons, I am very glad I did.”

Part II is a fascinating series of vignettes of self-delusion, excess and some truly awful make-up, but there is nothing more fascinating (well, at least in the way a house fire or car crash is fascinating) than watching Chris Holmes being interviewed on a floating chair in a swimming pool, while decked out in full stage gear, completely out of his head on vodka.

At one point, as if things aren’t unhinged enough, his mother turns up poolside to berate him for his behaviour. He is part man-child and part Cookie Monster, but mostly vodka, and in a movie that often floods the lens with the grotesque, he is truly something to see.

“When Guns N’ Roses ditched out, I was fortunate enough to recruit Megadeth,” says Penelope. “I had done a couple of music videos with the guys and Dave Mustaine and I were friends, so he agreed to be the closing band in the film. I was finally able to get some heavier music in the movie.”

Penelope had originally intended for Part II to focus on heavy metal, until the producers pushed her towards glam. Although Part I wasn’t widely seen (the VHS copy Dave Grohl managed to snaffle was, he said, like getting hold of contraband.

Ironically, the film has since been inducted into the US Library of Congress National Film Registry), Penelope was moved to make Part II as Los Angeles was changing before her eyes.

“In the mid-80s there was a dramatic shift in the scene on the Sunset Strip,” she says. “One night I was hanging out and I was amazed at the influx of metal fans. For me, it’s all about the study of human behaviour and preserving a moment in music history. Had it been strictly my call, the bands would have been more hardcore, heavier heavy metal.

"However, the producers found the glam side of metal more entertaining. And I guess it wasn’t the worst thing in the world, because people seem to get a giggle out of that lighter side of metal, the hair metal. The premise for all the Decline… movies is that the bands that perform must be relatively unknown, and they were.”

“What I remember was that someone in their production staff approached us over the phone and asked if we were interested in being in a movie about the Strip and the LA music scene,” says Nadir D’Priest (Nadir Munoz), singer with London, a band that was not only a staple of the late-80s West Hollywood bar scene, and the starting point for a host of musicians including Nikki Sixx, Blackie Lawless and Izzy Stradlin, but also one of the most animated and gleeful acts to perform a short live set specifically for the second The Decline Of… movie.

“It was nice to be part of the film, and I thought the movie was fucking great,” says Nadir. “I couldn’t believe that I was watching myself and our music on the giant screen – all that hard work had paid off. We had no complaints about it. My grandmother and my mom both attended the premiere at the Cinerama Dome [in Hollywood]. We were all completely hammered and riding around in a black limo.

“And it captured that whole scene; vibrant, colourful and loud! It seemed like there was a party every night in the Hills or on the east side of Hollywood. I remember all the girls on Sunset in their miniskirts, hair as high as possible, like exotic birds of paradise. The music scene was vibrant, busy, complicating, toxic, fun, destructive and basically an all-round good time! It will never ever be as it was; just awesome memories.”

“It was metal madness,” says Penelope. “You couldn’t even walk down the sidewalk. You could barely drive down Sunset Boulevard because drunk people would spill out into the street and you had to be careful not to run over them. A couple of my drunk-stoned friends actually did get hit.

"Luckily, they lived and partied on, like good headbangers do. There was no social media back then, so everyone passed out flyers to promote their bands. It was a feeling of exuberance, both guys and girls high as hell and looking for love, or at least a good lay.”

Alongside London, W.A.S.P. and Megadeth, Faster Pussycat performed for the cameras, as did Odin and Seduce (both wilfully committed to the idea of stardom or nothing, they might have changed their thinking on that now).

Aerosmith talked cocaine, Poison remembered the days before fame, Kiss’s Paul Stanley did his interview from his bed (with three doting and doe-eyed ladies draped over him like wet towels on a deckchair) and Lemmy was shot from a distance, the city’s skyline framed behind him.

“For me, the most powerful moment is when Dave Mustaine is reading the lyrics to In My Darkest Hour [from 1988 Megadeth album So Far, So Good… So What!]. That seemed so significant to me,” says Penelope.

“It represents the true nature of what great metal lyrics could be. And the instrumentation that went along with those lyrics gives it even more impact.

“Probably the most comedic moment in the film is when the outgoing ‘beauty queen’ at Gazzarri’s [nightclub on the Strip where both The Doors and Van Halen once played] says she is going to continue her ‘actress-ing’.

And that moment when the fans are being patted down by security. Back then, the bouncers were looking for booze flasks or spiked jewellery that could be used as weapons. It was a sign of things to come. Now they have to look for real weapons. Unbelievable.”

Penelope would take some of Decline…’s tainted magic with her when she went on to direct 1992’s Wayne’s World (her biggest commercial hit) and her excellent, if rarely screened, 2001 Ozzfest documentary, We Sold Our Souls For Rock ’n Roll.

Though she’s left Hollywood behind her, there is talk of her possibly working with Keith Morris of Circle Jerks and Pennywise’s Jim Lindberg about a movie on the birth of hardcore. But for now, briefly, she is focused on the past.

“It was totally decadent, indulgent and made the last days of Caligula look tame,” she says, 80s LA lights still burning Day-Glo red and green in her mind. “It’s dreary now. Tourists flocked in; the club owners saw the opportunity and catered to them. The real music fans and the good bands kind of faded away. It’s sad, but I’m glad I was there to experience it. And I’m glad I could capture it on film.”

The Decline of Western Civilization: Part II - The Metal Years is available to stream on Netflix now.

More information about Penelope and her work.