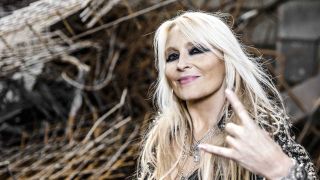 Universally known as the Queen Of Metal, Doro first came to everyone's attention in 1984 with Warlock's debut album Burning The Witches. The German band's success was significantly down to her leading presence, and since they ended in 1989, she has forged a very healthy solo career.

Nobody is more passionate about, and committed to, the metal cause than Doro, who has earned an enviable reputation among both fans and her peers, becoming a role model for women in the genre. And she has set a high standard for aspiring young metal talents who've been inspired by her vision in recent years.

Below, Doro picks the 10 records which changed her life.

“I heard this before I was ever in a band, and it totally blew me away. This is David Coverdale at his very best, and he is one of my favourite singers. Whenever I hear Ain't No Love In The Heart Of The City, it sends shivers down my spine. I also believe this is best version around of Mistreated.

"There is so much emotion and power running through this, and the fact it was recorded at the Hammersmith Odeon really made me want to play come over and see the band in London. And when I was 13 years old, I saw Whitesnake live – it was my first metal gig!”

“It's a tough call for me between this one and Holy Diver, but I'll go for The Last In Line. The title track and Egypt (The Chains Are On) are both amazing songs. I did a cover of the latter [for 2000's Holy Dio: A Tribute To Ronnie James Dio album], and I recall Ronnie telling me when I got to meet him properly in 2000 how much he enjoyed what I'd done, and that he played in during radio interviews!

"I even heard one radio show when he did just that – and to know someone I idolise like Ronnie liked what I did with one of his songs stunned me. Warlock and Dio had toured together in 1987, but never got the chance to talk properly. We finally connected in 2000 at an album launch party in New York for Magica, and he was such a nice person, as well as being one of the very finest vocalists.”

“I always got very high listening to this album, without ever needed to smoke a joint or get drunk. The music did it for me. Songs like Wish You Were Here and Shine On You Crazy Diamond never lose their effect on me. My best friend and I would go to her house after school, sit in her room, draw the curtains and listen to this album. It transported me to another universe.

"Actually, I filmed the video for my song Unholy Love (from 1990's Doro album) at Mono Lake in California, which was one of the locations used for the photos on the Wish You Were Here cover. That was remarkable, being somewhere that was associated with an album that means so much personally!”

“For me, and I know a lot of fans, this is the legendary Motörhead line-up. Lemmy, 'Fast' Eddie, 'Philthy' Phil... they were just tremendous and so influential. And when you hear Ace Of Spades itself, this is such an incredible anthem that still sounds brilliant. Everything about the album is wonderful.

"You look at the sleeve, and see the three of them dressed like Mexican bandits, and they look so mean and nasty, ha! It is such a classic photo. I was lucky enough to get to know Lemmy very well. The first time I met him was in 1986 at the Monsters Of Rock Festival. We were both on the bill, and we hit it off immediately, becoming great friends."

“You know how much I love great singers, and Rob Halford is one of the finest around. Priest were so inspiring to myself and also to Warlock. I did a cover of Breaking The Law (for the 2004 album Classic Diamonds), because I love the song so much, and like the whole of British Steel it means a lot to me.

"Warlock got the chance to open for Judas Priest across Europe in 1986 and I have fond memories of that time. And such an education to see them perform every night."

“This is yet another band I know so well. I have lost count of the number times I have played on the same bill as Saxon. It was a close run thing between this album and Denim And Leather for this list. In the end, Strong Arm Of The Law just wins out.

"All the songs are excellent. I still put on this record from time to time and it never loses the magic. That's a sign of a great album. And Saxon are one of the very best metal bands of all time.”

“As with a lot of the artists on this list, it hard to choose just one album Metallica have done. But I will go for Ride The Lightning. One of the reasons is that I love James Hetfield's vocals on this. I recall that it was about this time a lot of people were urging Metallica to get a new singer. But I always defended his vocals, because they worked so well with the material. He is so real and authentic, and has lots of charisma.

"When I first saw him I must admit to being a little in love with James, and I did get to know him quite well. But nothing ever happened between us! I simply admire him as a singer and live performer."

“I am a big fan of Blackie Lawless, and this album is so soulful and deep. It struck a chord with me. I have to say that Warlock did our first UK tour with W.A.S.P. in 86, just after we'd finished the Judas Priest dates I mentioned earlier, and Blackie was super nice to me. I know a lot of people have said he's arrogant and difficult to deal with. But I never found him like that at all.

"On the first date of the tour, I was feeling very ill. Blackie noticed this, and gave up his dressing room to me, so that I could rest before going onstage. He made sure I wasn't disturbed, and also gave me some medication. When I woke up I felt so much better, and that was all down to him.  Blackie was very kind.”

“This was a Rolling Stones record that sounded a little different to their other releases. It's not as heavy, but with songs like Fool To Cry, it really stands out. I was a big fan of these guys, even before I got into metal.

"The first proper band I ever saw live – this was before Whitesnake - were the Stones and Jagger and Richards were just so cool. They've remained in my heart to this day.”

“I first heard this when I was a teenager, and it overwhelmed me. Yes, I have heard the stories about how the live recordings might have been redone in the studio, but I don't care. It sounds so exciting. And the crowd just come across brilliantly – they help to make the album such a phenomenal experience. This is Kiss in their prime.

"I worked with Gene Simmons on my Doro album (1990) and it was a dream come true for me. He was so helpful and encouraging, and did a great job on the production front.”