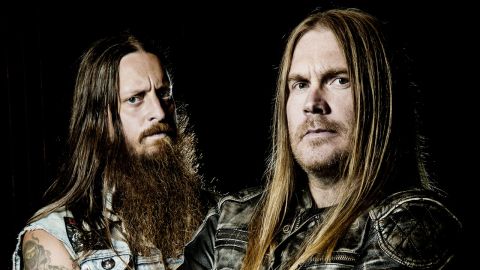 If you have any inclination towards black metal at all you'll have heard of Darkthrone. Over the course of three decades Gylve "Fenriz" Nagell and Ted "Nocturno Culto" Skjellum have forged an unsurmountable and incredibly influential legacy while staying away from the controversial fire light of the rest of the original black metal "inner circle" members.

Frustratingly to fans, the duo haven't played a live show in over two decades, but nevertheless they continue to attract new admirers as well as maintain loyal support from their well established fanbase due to their prolific and passionate natures, and as their ability to stay both authentic and underground, all the while being one of Norway's most successful black metal exports.

From their original "Unholy Trinity" of albums that established that quintessential black metal aesthetic and sound, Fenriz and Ted have continued to relentlessly expand on this sound, and even strayed away from the traditional black metal style without losing their esteem.

Part of the band's enduring appeal is perhaps this very fact: that they refuse to conform to any specific rules or cave in to what is expected of them. They always do their own thing, without any concern for whether their detour from the last record's sound will inspire a backlash from hardcore fans and elitists (and it almost never does).

Driving force behind the band, drummer Fenriz, is well known for his extensive musical knowledge and eccletic tastes. Presenting radio shows, compiling playlists and enthusing about every aspect of heavy metal in numerous documentaries and interviews, he's become perhaps one of the most respected and well-loved figures in black metal. All of this expertise has informed his music, resulting in Darkthrone's music never getting stale or "samey".

With Fenriz's mind remaining a fertile ground for the picking, all of these unconscious inspirations are channeled through his unique filter that comes only from being both a mainstay and originator of the Norwegian black metal scene and a truly passionate musical expert.

Elements of doom, old school heavy metal, death metal and beyond have all been expertly blended into the mix, with the last handful of albums owing a lot to that undeniable "70s sound" – full of feedback and Sabbathian riffs with a punk-like energy akin to Motörhead – all the while still maintaining an unmistakably Darkthrone vibe.

With Old Star Darkthrone have thrown us yet another curve ball, jumping from the 70s and into the decade with which Fenriz has proven to have quite the love-affair: the 1980s. Fenriz has claimed that the band haven't been "black metal" since their original handful of albums, but this record almost certainly harks back to their earlier years, albeit with amped up virtuosity and a maturity that only comes with both age and experience.

Moving away from the raw punk and fuzzy metallic sound, Old Star blazes its way into the realms of blackened doom and resurrects the classic 80s New Wave of British Heavy Metal sound that influenced the early Norwegian BM scene.

Slowed down tempos mixed with Ted's black metal elements and thrashy beats and doomy solos make for perhaps some of the catchiest riffage in Darkthrone's catalogue so far.

Opening track, I Muffle Your Inner Choir begins with a fast paced thrashy guitar build up that gives way to doom-laden, slowed down riffage. There's a quick u-turn as we are led into Fenriz's heavy metal banger, The Hardship of the Scots which is full of tasty guitar riffs in true NWOBHM fashion, sandwiched in between doomy verses.

Next up is the titular track, perhaps the most doomy track on the record. Alp Man follows this up with a nice blend of 80s shaped trudging heavy metal and early-90s doom (throwing to mind a rough and ready, grittier version of Cathedral).

Next is the Nocturno Culto penned Duke of Gloat, where we are steered into blacker territory with the reintroduction of Ted's classic black metal guitars and thrashy d-beats injected between slow thuds. The record culminates with The Key Is Inside The Wall, leaving us with a tasty chugging riff and old school slowed down thrash metal blended with classic doom.

Indeed they might now be "old stars" but they are still burning bright, retaining that exceptional light that first grabbed our attention three decades ago. The only criticism? There's just not enough of it...