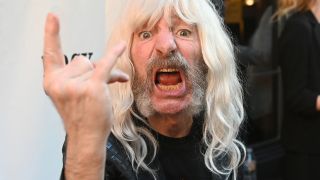 Derek Smalls, aka comedian Harry Shearer, has reflected on the filming of hit 1984 documentary This Is Spinal Tap.

The bass legend is this weekend’s special guest on AXS TV’s Paul Shaffer Plus One, which will be broadcast on Sunday at 8pm ET – and in a preview clip from the show, Smalls calls the groundbreaking film a “hatchet job,” laying the blame at the feet of director Marty DiBerg for making them look ridiculous.

He points to two scenes in particular – when the lads got lost backstage, and the unfortunate moment Smalls found himself trapped in the translucent pod during their epic performance of Rock ’N’ Roll Creation.

Smalls says: “We never had control of it. I’m going to be scientific about this: 93.97% of the time, we found our way to the stage straightaway. You never saw that in the film!

Last year, Smalls released his debut solo album Smalls Change (Meditations Upon Ageing), with Classic Rock catching up with the bass guru to talk about God, the Tap, politics, drugs, getting old, death and not being dead.