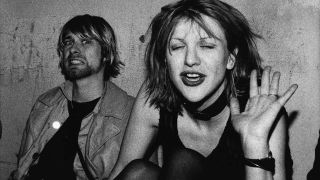 Kurt Cobain's Seattle mansion, where he lived with wife Courtney Love and daughter Frances Bean Cobain until his death in 1994, is up for grabs if you happen to have $7.5 million spare.

According to the listing over at premier residential agents Ewing & Clark, the property "features a shingled exterior distinguished by expressive windows, stone accents & Queen Anne styling, completely updated throughout.

"Gracious rooms enhanced by an open floor plan & fine millwork. Views of gardens, Lake Washington & Cascades. A stone's throw from lake & the bustle of Madison Park. 15 min to downtown. A once in a lifetime opportunity!"

The property previously housed a greenhouse, where the Nirvana frontman was tragically found dead in April 1994, not long after the young couple purchased the property.

Courtney Love tore down the greenhouse following his death and continued to live at the property with their daughter until selling it to a trust in 1997.

Check out a few images of the property below: