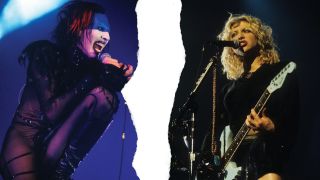 But no tour – and no clash of egos – can match 1999’s aptly dubbed Beautiful Monsters tour, featuring a co-headlining bill of Marilyn Manson and Courtney Love’s grunge rockers, Hole.

With stoner rock hellraisers Monster Magnet added as openers at Manson’s request, the tour was unmatched for debauchery, chaos and pure, outright hostility.

“I knew it was going to be a complete fucking disaster,” chuckles Monster Magnet frontman Dave Wyndorf today. “I knew these people were going to go tooth and nail. We had the easy job: play a short set, then sit back and watch the fireworks every night.”

Thirty-seven dates were booked. Only nine were completed. And they became nine of the most notorious shows in rock history.

In the week of October 3, 1998, Hole’s Celebrity Skin and Marilyn Manson’s Mechanical Animals were both in the US Billboard charts, sitting at No.10 and No.1 respectively.

Both records were produced by Michael Beinhorn, who was given unobstructed access to how both Courtney and Manson operated.

“In the period leading up to Celebrity Skin, Courtney was a dynamo,” he tells us. “It didn’t matter what anyone said to her, she could take that energy and turn it into something that’d make her go even more.

Manson had his persona and the concept for his album mapped; Mechanical Animals wasn’t as gritty and biting as Antichrist Superstar, but the power is in the depth of emotion.”

To capitalise on Celebrity Skin’s success, Hole’s management, Q-Prime, were keen on sending the band out on a joint tour with someone of similar scale. Still, the idea that these two disparate artists would join forces seemed absurd.

“Here you had two artists that were going for the brass ring in very different ways,” says former MTV staff writer Gil Kaufman. “Manson was in his glam metal apex and was being as debauched as he could, while Courtney had become a star, with a Golden Globe nomination [for 1996 biographical drama The People vs. Larry Flynt], and she’d made a much slicker pop album. She was trying to be the ultimate Californian rock star.”

“Courtney was transitioning from her movie success, back to her job as a rock musician,” adds ex-Hole guitarist Eric Erlandson. “She didn’t seem truly happy with the realities of the music industry at that time.

Also, I knew Manson was more in the metal, coke and groupies vein. A sweet puppy with some shiny fake fangs. Ambitious and mischievous, friendly, but high school cruel as well.”

It didn’t help that there was a public feud between the two artists, born from comments in Manson’s 1998 book, The Long Hard Road Out Of Hell, about the Hole singer. He’d insinuated that Courtney had no interest in talking to him until he became famous; she’d responded by referring to Manson as ‘Brian’ in interviews.

Despite this, Q-Prime aggressively pursued Manson to join the tour. “I was hesitant,” Eric tells us. “We weren’t a good match.”

“This was the managers’ and booking agents’ idea,” Dave Wyndorf chuckles. “Those bands needed each other to fill those stadiums and arenas, the managers knew that, but their egos wouldn’t allow them to admit it.”

Despite initial reservations, a deal was struck and the dates were announced. Manson set the tone before the tour even started by claiming Hole were “the last band in the world I’d ever, ever want to tour with. But I love a challenge.”

“We just wanted to tour the record,” says ex-Manson keyboardist Stephen Bier, AKA Madonna Wayne Gacy. “Management, record labels, they all said it was a good idea. I didn’t have a problem with it, but Brian and her have pretty big egos, so I knew something was going to happen.”

“I remember thinking, ‘There’s no way these two maniacs are going to make it,’” Gil says. “Someone is going to piss someone off. It’s going to be impossible, but it could also be a really fun, bizarre night at the opera. They knew that, if they were out on tour together, people wouldn’t be able to take their eyes off of them.”

The Beautiful Monsters tour opened for business on February 28, 1999 at the Spokane Arena, Washington. Immediately, there was tension. “How could there not be?” Eric laughs.

“She started out doing some really cool punk rock shit; we all loved the first Hole record,” says Stephen. “But she came off as this Hollywood, celebrity- loving kinda thing, which I found very strange. She had a private chef, a yoga instructor and this whole Hollywood entourage, which didn’t seem very rock’n’roll to me. She was more like an actress playing at being a rock star than a rock star that had become an actress.”

“They had to do certain interviews together and they acted all chummy,” belly-laughs Dave. “It was like The Godfather; you keep your friends close and your enemies closer. It started as gentle ribbing onstage and it just got worse. Manson is better at that stuff than Courtney.”

Additionally, the odd couple mentality had spread from backstage areas and gossip columns and into the crowd.

“I reviewed the show at the Cow Palace in San Francisco,” Gil tells us. “Manson’s fans were these cyber-goth, Nine Inch Nails-type guys, whereas Hole had, I guess you’d describe them as ‘Coachella babies’. Indie rock, hipster. It was like a high school party where you have two sets of people that really don’t get along. After the show I had to get a few ‘man on the street’ interviews for the piece. It was such a dichotomy; Manson fans saying ‘Hole suck! They were boring!’ and Hole fans were saying Manson was gross and a pig. It was as if management had scripted it for them.”

Confrontation reared its head as early as the second night, in Vancouver, with Love running onstage and jumping on Manson’s back after a snarky comment was directed at her. Later in Manson’s set, he took a tumble, injuring his wrist and storming off during the encore. The bad blood escalated at pace.

“It was less rock’n’roll and more 50s TV show,” Dave Wyndorf sniggers. “These two huge stars were shouting obscenities at each other. She’d turn up and scream, ‘You bum! You’re nothing!’ at him. Like a Western, there wasn’t enough room for two sheriffs in town.”

The two bands also had different approaches to the touring lifestyle. Manson’s success gave him a platform to live out his most decadent rock star fantasies. Courtney, having previously been to rehab, and her band were appalled. “I was disappointed to see that 80s LA hair metal mentality was back in full force,” sighs Eric.

“A lot of our fans aren’t allowed to come because parents are scared of Brian and his burning cross,” Courtney told MTV. “The other night Twiggy [Ramirez, ex-Manson bassist] vomited onstage.

“It was no different to any of the tours I did with the band,” says Stephen. “But she didn’t like it. It was ironic, because when we first saw her when she was going out with Trent and we were on the NIN tour, she’d turn up on our bus wasted.

"Five years later, she’s turning her nose up at us being a rock’n’roll band; the reason you’re in a band is so you can get fucked up on a Wednesday. But suddenly it’s beneath her?”

Unsurprisingly, Monster Magnet were in the Manson camp when it came to the access to excess. “The aftershow parties were something else!” Dave screams.

The barbs being thrown around during the sets increased in savagery. Manson threatened to make Courtney his sacrificial cow. She called Manson “some fucking guy with a blue head [and] a big sign that says, ‘Drugs’.” By this point, the tour was gaining more press for what was happening between the two singers than for the music.

“The two of them had never met a controversy they couldn’t stir up,” Gil says. “They both wanted headlines, they both wanted to be the biggest rock star in the world. How do you do that? By sucking all the oxygen out of the room and leaving nothing for anyone else.”

As predicted, it couldn’t last. Hole played their final show of the tour on March 14, at the Inglewood Forum. Their reasoning: the 50/50 split of costs between the two artists, when Manson had a bigger production. During Manson’s set that night, he slipped onstage, hairline fracturing his ankle and suspending the shows as a result.

“He injured it earlier in the tour,” says Stephen. “He was struggling on, but it ended up being the second time that we had to cancel a show in LA, which was obviously very frustrating. I went to see Henry Rollins do a spoken-word show the night we were meant to be playing, and he was being a real dick about it. I had to listen to people laughing at us.”

When Manson returned to action, the Beautiful Monsters tour was dead. His band resumed the tour under the Rock Is Dead banner, but Hole were off it for good. Since then, both bands’ legacies have had significant ups and downs.

“Our label, Geffen, was in the process of being swallowed up by Interscope, which was more rap and metal focused,” Eric shrugs. “We fired our lawyer, we never finished the tour, Melissa [Auf Der Maur, Hole bassist] joined Smashing Pumpkins and the band was essentially over by the end of ’99. Hello PTSD!”

“When Mechanical Animals came out, the projected sales figure for the first week was 300,000 copies,” says Michael Beinhorn. “BMG were excited, saying, ‘We’re going to hit No.1 and sell 300k!’. It sold 230,000 and got to No.1, but it wasn’t enough. The label lost interest, they took down the huge billboard they had in Times Square for the album, the president of the label called Manson up, screaming at him for having tits on the cover.

"I think that, and what happened at Columbine, which really affected him emotionally, meant that he never made an album up to the standard of Mechanical Animals or Antichrist Superstar again. He just didn’t get the support.”

“It’s sad to see Courtney become this Hollywood Boulevard character,” Gil adds. “She’s become this strange figure in the industry that was legendary for a while and then lost her purpose.”

These days, they appear to have buried their differences, the Hole singer recently starring in Manson’s video for Tattooed In Reverse. But it’s hard not to look back at their tour of tabloid notoriety, and long for the drama, myths and music they helped to create.

“Decadent. Over-commercialised. Over-stylised. Greedy. Empty. Vacuous. The last hurrah,” is how Eric remembers the tour. “It was that end of the century thing. I’m not sure we were aware of it at the time, but the general mood was, ‘Let’s live it up before the apocalypse.’”

“Gasoline with an open flame can’t help but combust,” Gil shrugs. “That was the genius of that tour. You never knew whether or not it was going to be the last night. Who knew what was going to happen? Whatever it was, you knew you’d have a story to tell.”