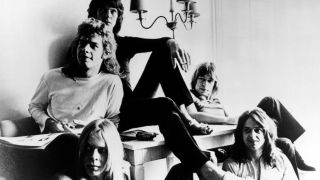 Yes, Pearl Jam, Jane’s Addiction, Steppenwolf and Bad Brains are among the acts nominated for the 2017 Rock And Roll Hall Of Fame.

ELO, The Cars, Depeche Mode, Journey and MC5 are also on the long-list for next year’s ceremony, which will take place in April at the Barclays Center in New York and will once again be aired on HBO in the US.

The fan vote is now open at the Rock Hall website.

Pearl Jam’s nomination comes in the first year that the band have been eligible. The Rock Hall only nominates bands after at least 25 years has passed since the release of their debut album and Pearl Jam’s Ten came out in 1991.

Yes have been eligible for more than 20 years and have been nominated twice, without ever being inducted. Former Yes frontman Jon Anderson said earlier this year that he’d welcome a reconciliation with his former bandmates if they were ever inducted.

He said: “It’s gotten happen at some point. Rick Wakeman used to joke that we’d call come out in wheelchairs. My mantra always is, ‘It’ll happen when it happens.’

“Three or four years ago I did a show in Cleveland and I went to the Hall Of Fame and did a storytelling hour at lunchtime.

“I met everybody and they were very sweet. They were very upset I wasn’t in. I said, ‘It has nothing to do with me. I’m just a singer in the band.’ They pointed to a corner on the second floor and said, ‘That’s reserved for Yes.’”

The full list of 2017 nominees can be viewed below, with the inductees to be confirmed in December.