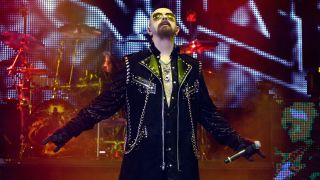 Metal God Rob Halford says he’s pleased that the Rock And Roll Hall Of Fame is becoming more diverse and adds that it would be “a real treat” if Judas Priest were inducted.

Priest have been eligible for the Rock Hall since 1999 – 25 years after the release of their debut album Rocka Rolla.

Halford tells KBAD 94.5FM: “We got a Grammy a few years ago, which was highly unexpected and a tremendous thrill. And the Rock And Roll Hall Of Fame, you know, is a controversial entity.

“It’s not like the Baseball Hall Of Fame or the NFL Hall Of Fame. Those incredible institutions have very little discourse going on in them.

“Music – much like sports – is very passionate, and I think the Rock And Roll Hall Of Fame has been getting more diverse now, which I think it should.

“And if and when that day comes, I think that will be a real treat.”

The Rock Hall has come under fire for including acts like Madonna, Grandmaster Flash, Run–DMC and Abba before traditional rock acts such as Kiss, Deep Purple and Priest.

When Kiss were inducted in 2014, the band chose not to perform live at the ceremony as current members Tommy Thayer and Eric Singer were not part of the induction. Kiss wanted to perform with both the classic lineup and their current line, but chose not to play live at all when that request was denied.

And this year, Deep Purple also chose not to perform live as current members Steve Morse and Don Airey were not inducted.

Judas Priest are currently working on their 18th album.

Judas Priest: "For years we had to hide the fact that we were skint"