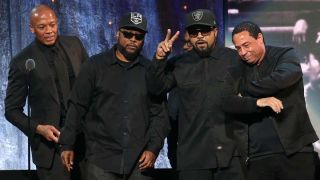 N.W.A insisted their non-conformist spirit earned them their place in the Rock And Roll Hall Of Fame as they were inducted alongside Deep Purple, Cheap Trick, Chicago and Steve Miller.

The 31st annual Rock Hall ceremony took place on Friday at Brooklyn’s Barclays Center and N.W.A were quick to address those who say hip-hop and rap have no place in the Rock And Roll Hall Of Fame.

From the podium, Ice Cube said: “Are we rock’n’roll? And I say – you’re goddamn right we’re rock’n’roll.

“Rock’n’roll is not an instrument. It’s not even a style of music. It’s a spirit that’s been going on since the blues, jazz, bebop, soul, rock’n’roll, R&B, heavy metal, punk rock, and yes, hip-hop.

“Rock’n’roll is not conforming to the people who came before you, but creating your own path in music and life. That is rock’n’roll and that is us.”

Cube’s bandmate MC Ren took aim at Kiss bassist Gene Simmons, who said earlier this year that he was looking forward to the death of rap.

Ren said: “I want to say to Mr Gene Simmons that hip-hop is here forever. We’re supposed to be here.”

Deep Purple were inducted by Metallica drummer Lars Ulrich, who said he was “somewhat bewildered” it took so long for the Rock Hall to reach out to the band.

Ulrich said: “With almost no exceptions, every hard rock band in the last 40 years, including mine, traces its lineage directly back to Black Sabbath, Led Zeppelin and Deep Purple.

“And as far as I’m concerned, these three bands should always be considered equals for their songwriting, their recordings and their accomplishments.”

Steve Miller took a swipe at Rock Hall organisers, saying they need to show more respect to the artists and complaining that only he and his wife had been given tickets, while his band had been overlooked.

Highlights from the ceremony will be broadcast in the US on HBO on April 30.