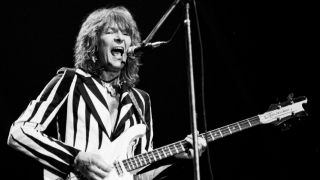 Chris Squire came in to the Team Rock studios to talk to the Prog Magazine Show on the eve of the last Yes album he’d appear on, Heaven & Earth. The band had just returned from their Three Album Tour, with a set, as the name suggests, centred around The Yes Album, Close To The Edge and Going For The One.

“In truth,” said Squire, “We’ve been playing some of those songs in our set for the best part of forty years, Going For The One album, less so, but we all like the musical challenge from that and it was nice to see it improving across the tour.

“That said, it’s always been important to me we have a new album like Heaven & Earth, Yes needs to move on and create new material, that we aren’t a legend peddling band, there are plenty of those bands around. I’ve always wanted to have something going forwards and in 2011, before we made the Fly From Here album, we’d actually had a long break of new material, so it was a good feeling to get that done and this album too.”

The band worked with Roy Thomas Baker for the Heaven & Earth album, the first time they’d worked with the producer since a series of ill-fated sessions in France in 1979.

“We’d gone to Paris in 1979 with Roy to work on an album, that was with Jon Anderson and Rick Wakeman, and we’d started work and then Alan White decided one night that he would go to a roller disco with Richard Branson of all people. They’d all tied one on and Alan broke his ankle. We’d done about four tracks by then, but they were half-finished, so we knocked it on the head and after that the band started to fragment, it sort of fell apart a little bit. We made Drama after that, but we never did get to work with Roy again until now.”

Sorry, this On Demand content is no longer available.

To learn more about Chris Squire’s remarkable musical legacy then click the link below.