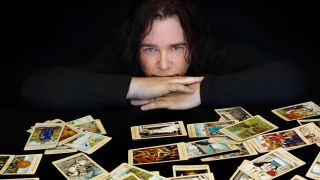 Chris Squire is among the many guests on Billy Sherwood new album Citizen, his contribution to its title track having been laid down at a Holiday Inn just before the legendary bassist fell ill.

“Sadly, it was Chris’ last ever recording,” Billy Sherwood relates. “I went to Arizona, near to where he lived, and we hung out for a weekend. Getting home, I called to thank him – that’s when he told me his news. The way it went downhill from there shocked everybody, it was so fast.”

A mere six weeks later, Squire was gone, with Sherwood having agreed to step into the gap for a period of indeterminate time.

“Chris was a mentor of mine and he knew I had the tricks to pull off the role [of live performance] in his place, because I’d stood next to him on many a tour,” Sherwood says, adding: “It felt like I was more in denial than Chris was, but he kept insisting I was the only guy for the job. There were lots of heavy conversations and he made me promise. Upon reflection, I’m sure he knew it wasn’t going to work out and he wanted to ensure everything was left behind the way he wanted.”

This includes the preservation of Yes as both a recording and touring entity.

“Yes was Chris’ passion while he was alive, and he definitely wanted the band and its music to go on afterwards,” Sherwood stresses. “And making a new record? Yes has always moved at its own pace, so we’ll have to see where that goes.”