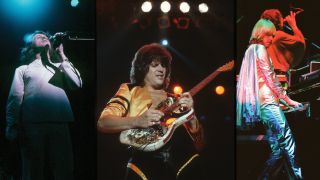 The ARW union, for want of a better word, of Jon Anderson, Trevor Rabin and Rick Wakeman, was first announced by the jovial keyboard player at the start of this decade, but things moved slowly as busy schedules interfered. We say “reunion” – technically the three Yes alumni had never worked on a studio project before, despite each possible combination of two having done so, and all three playing together on the 1991-‘92 Union tour.

When Chris Squire passed away, the trio knew it was time to get moving. An American tour billed as An Evening Of Yes Music And More begins this winter, with worldwide gigs happening next year. A new album is in the works, still being tweaked as we speak. How’s it coming together?

“It’s really, really good!” says Anderson delightedly. “It’s getting intense now; we’ll spend much of the next two months creating a show to tour the US through October and November. Then we’ll be in the UK in March. In a way we’ll have got to know the show by then… touring is good for the music, so we’ll really start flowing by the time we get to Britain!

“It’ll be a mix of Yes music and our new material. I can hear everything in my head… it’s a question of pooling your energies together to make it work the very best it can. And in a way I don’t want it to be too like Yes: we want to use a more 21st-century sound, which, given new technology, is how we record. For instance, South Side Of The Sky – we’ve learned now how to project that best. And we might switch things around… start with that section in the middle, come back – you know, we’ll rearrange things in line with our own perceptions.

“I said to them, ‘The music will challenge us and redesign our knowledge.’ For which I have great gratitude. Music is the master, not us. We’re just a part of the creation.”

It’s odd, almost a quiz baffler, that for all the labyrinthine Yes interactions, the three – described by Wakeman as “the holy trinity of Yes” – haven’t recorded as such before….

“Not really! We’ve communicated a lot online and through Skype… we’re all on the same world though, the same planet,” says Anderson.

Indeed, it might seem surprising to some that Anderson, with his profound spirituality, and Wakeman, with his love of bawdy and curry-related jokes, have emerged from the lengthy Yes saga as firm friends…

“I see what you mean, but that’s just it – I love really good comedy!” Anderson says. “And the last time we toured with Trevor [Rabin], I was telling him: ‘You’ve got to listen to the Peter Cook and Dudley Moore album, where they’re chatting in the pub!’ Derek And Clive, that’s it. Comedy unites everybody! Mr Bean is loved all around the world because everybody of every language can understand it. Comedy unifies everybody, like music does. Oh, I laugh endlessly with Rick and Trevor. When I was last on tour with Rick, he kept playing funny notes instead of the correct ones at the start of songs and looking at me…

“If anything, we have more fun these days, because we laugh at each other – and at ourselves!”

What can Anderson reveal about the new music?

“I heard it… Trevor’s done some power-rock tracks for some of the record; it’s really bananas. They work, you know. Then I put some ideas on them… so it became furious, cinematic. There’s long-form material too. Oh, it goes from one extreme to another! Three guys from LA will be joining the band for the tour: they’re very big Yes fans and they’re truly excited to be doing the classic stuff. At first, maybe a little tentative – can we pull this off so that people will enjoy it? Trepidation. But now I believe it’ll take the band and the audience on a great journey at the same time. It’s all respectful to past Yes, but… fresh.”

Though born in Lancashire, Anderson has lived in the US for over 25 years now and has US citizenship. Does California feel like home?

“Well, I met this beautiful lady 24 years ago and fell in love – I wanted to marry her the same day,” he says. “And we’re still beautifully in love. Two of my children live in LA, and my son visits often from London. I was going to move to China once, you know. I don’t know why. I’d been three or four times and fell in love with what China truly is – a combination of eternal and futuristic thinking. Now we bang on about Greece being once the centre of the universe, but two and a half thousand years ago China was a flourishing metropolis… so many kingdoms and stories. Take away their politics, and we’re still learning from their knowledge.”

So that was your road not taken?

“Can you imagine? It’s funny. But I’m here. Now here in the US we have this procession of corruption – Trump, Clinton, crazy money being spent for someone to get into power. FIFA – corrupt too. A big change is coming, I’m sure…”

Prog somehow doesn’t think of the 71-year-old Lancashire-born cosmic visionary as being a football fan, but when asked if he ever misses Accrington, he sighs at the injustices of League Two play-off battles.

“Oh sure… well, Accrington Stanley just missed out on promotion, that was so sad. I hope they can still pay the electricity bill. Anyway, California has floods and droughts, because its topography is just like Lancashire, but the West is beautiful. There’s a problem with pollen, which troubles my allergies, but you have to take the rough with the smooth. The wine is good too.”

How is his health now? After some worrying times in recent years, is Anderson fighting fit again?

ARW tour the UK in March 2017. See the official website for more.

Jon Anderson and Roine Stolt: The story behind new album Invention Of Knowledge