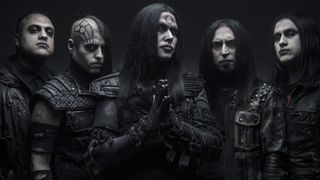 Wednesday 13 has announced that he’ll release his seventh studio album this summer.

Titled Condolences, it’ll launch on June 2 via Nuclear Blast after the former Murderdolls man recently signed with the label.

Wednesday 13 says: “We’re so excited to finally announce that we have signed with Nuclear Blast Entertainment! It’s an honour for us to be on the roster among so many other great bands and friends.

“Thanks to Nuclear Blast for giving us the opportunity and our fans for your undying support. We’re looking forward to many more years of this with all of you.”

Wednesday 13 revealed in July last year that he was working on new material with producer Chris ‘Zeuss’ Harris.

He said: “I can’t tell you how excited we are to work with Zeuss again. We’ve been talking about it for years and now we’re gonna finally make it happen.

“We had such a great time working with him on the Murderdolls album a while back. This will be our heaviest album to date and I can’t wait to see what we come up with working alongside Zeuss.”

Wednesday 13 will kick off his Undead, Unplugged UK tour later this month, with support from Bourbon Crow. He’ll also headline the Dogtooth Stage at this year’s Download festival in the UK on June 10 where he’ll perform a full electric set.