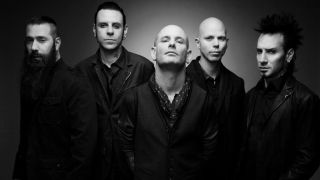 Corey Taylor says the band’s upcoming sixth record is “probably the coolest album I’ve made since the first Slipknot album.”

They’ve been working on the follow-up to 2013’s House Of Gold & Bones – Part 2 with producer Jay Ruston and have been recording the material live – a move Taylor says has brought incredible energy into the studio.

The Slipknot frontman tells the BBC Rock Show with Daniel P Carter: “We’re almost done with the album. We hit the ground, basically finishing a song a day. We started in the studio on January 7 and we have 16 songs done – we only have three left. It’s unbelievable. We’ve only really taken time off because we needed to.

“We just destroyed it and it sounds incredible. Everyone is saying the same thing – not only are the songs good, but the energy is incredible because it has that live vibe. This is not beat-detected, auto-tuned or pitch-corrected. It’s so bad ass it’s not even funny.”

Taylor adds: “We have six singles on this album. I’m really excited – this album is great because it’s got elements of everything. It’s got the heavy energy of the 80s, there’s punk moments, there’s hard rock moments – all the great amalgam of music.

“There’s even jazz and hip-hop moments, it’s really, really cool. It’s probably the coolest album I’ve made since the first Slipknot album. I feel very confident making that statement because it’s so good.”

No release date has been confirmed for the album, but it’s expected to launch later this year.

Stone Sour released a 10th anniversary deluxe reissue of their 2006 album Come What(ever) May in December.