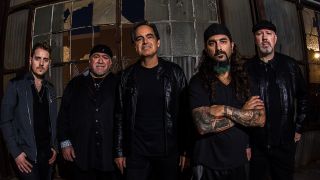 The Neal Morse Band have released a live video for their track Dark Melody.

The clip has been taken from the group’s upcoming album The Great Adventour: Live in Brno 2019, which will be released on March 6 through InsideOut Music as a 2CD/2Blu-ray Digipak.

The album was recorded and filmed in the Czech Republic at the beginning of 2019 when Morse, Mike Portnoy, Randy George, Bill Hubauer and Eric Gillette toured in support of their latest studio album The Great Adventure.

Along with the 24 tracks that were performed on the night, The Great Adventour: Live in Brno 2019 will also feature two tour documentaries from the US and the Europe, along with a selection of official promo videos.

Reflecting on the tour, bassist George said: “After the Similitude Of A Dream tour, expectations were really high, and we had more people coming to these shows than ever before. People were really excited to see it, so we had to make sure that we delivered.”

Check out the video below, where you'll also find the tracklist, cover art and pre-order details.