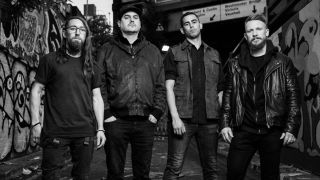 Temples On Mars have released a 360º video for their track Black Mirror which was filmed during the band’s performance at Prog Power Europe in the Netherlands last year.

The song has been lifted from the group’s self-titled debut album, which launched in April last year through Primordial Records.

Bassist Daz Carikas says: “Temples on Mars are excited to release the first 360 VR video in a series recorded live at Prog Power Europe 2018. Immerse yourself in the live experience and feel what it's like to be onstage with the boys!”

Carikas is joined in the lineup by vocalist James Donaldson, guitarist Gerald Gill and drummer Dean Gibb, with the band formed by former members of Agent, The Spindle Sect and Starseed.

Temples On Mars will play at London’s 229 The Venue later tonight (July 8) along with Deity’s Muse and Kamikaze Test Pilots.