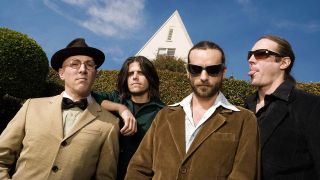 Tool have issued a warning to fans about negative energy surrounding the long wait for the follow-up to 2006 album 10,000 Days.

Despite recent comments from members and friends that the record is slowly coming together, many followers have expressed frustration at the time it’s taking.

Now the band have spoken out via webmaster Blair McKenzie Blake in a recent online newsletter, saying: “When it comes to the subject of the new Tool album, even though those whose negative thoughts and actions are in the small minority, their negative attitudes are having consequences that extend far beyond the next Tool record.

“Their hostile behaviour and small-minded opinions are not helping in bringing about the next Tool record. They are also not fooling anyone by saying they’re ‘tired of waiting and jumping ship,’ or they’ve ‘had enough and are over this band.’

“Why is it that those who complain the loudest are almost always the first to comment negatively on any given post? It’s as if they’re sitting at their computer, waiting for any piece of news so that they can pounce with their cynical viewpoint. By doing so, they invalidate all their disavowing.”

Blake offers a parable about positive thinking by telling of a recent visit to a fast-food outlet, where his girlfriend was given the wrong order. He was all set to start a confrontation until she told him the food was better than what she’d asked for, and that she’d order it again in future.

He tells haters: “Wait! Don’t pounce! Don’t let those negative thoughts and that defeatist attitude get the best of you.”

Returning to the Tool album, he reminds fans of bassist Justin Chancellor’s recent statement that the material was “cooking” and continues: “After waiting for so long, here you are, still alive and kicking on this aqueous gem in the cosmos.

“You can make it. You can do this. With your newfound positive attitude, the home stretch will be a piece of cake.”

But he adds: “Remember: thoughts have energy. Make sure your thoughts are positive – or all hell’s gonna break loose.”

Meshuggah’s Marten Hagstrom this week reported that he’d heard demos of the Tool album and that it was their best music yet.

The A-Z of Tool