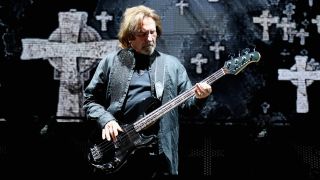 Black Sabbath bassist Geezer Butler believes heavy metal “is here to stay” and that festivals will continue to be vital to the genre.

Taking the opposite view to artists such as Gene Simmons – who famously said “rock is dead” – Butler insists there is still an appetite for metal and that there will always be a demand.

He tells Tulsa World: “I think metal is here to stay, in some form or other. The metal festivals in Europe are massive events, attracting 100,000 plus audiences. And I think that is the future for metal – huge gatherings with several bands.”

Earlier this year, Metallica bassist Robert Trujillo said he and Butler had discussed the state of metal and that they both feared that there might be no big acts to carry the torch once Sabbath and Metallica call it quits.

Trujillo said: “I ran into him on a flight from London and he was like, ‘Who’s going to carry the torch? When Metallica’s done and we’re done, who will it be?’ I was like, ‘Let me think about that.’”

Sabbath are on the road on their The End tour, which will wrap up with two shows in their hometown of Birmingham, England, in February of next year.

Butler says he has been amazed by the reaction of the audiences on the tour and that is is playing better than he ever has.

He adds: “The fans have been great on this final tour. It’s almost like a party atmosphere as it’s the end of an era. I have thoroughly enjoyed myself and feel that I’m playing better than ever, knowing that this is how fans will remember us.”

Sabbath will release a four-disc super deluxe edition of their 1970 second album Paranoid on November 11.