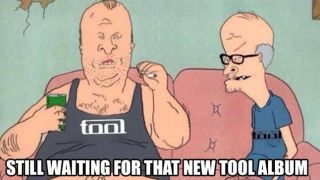 Patience is a virtue if you’re a Tool fan – we’ve now been waiting for the follow-up to 10,000 Days for so long, entire civilisations have risen and fallen. Well, that’s not quite true, but it has been 10 years, so we’re heading well into Axl Rose territory.

Luckily, while Maynard James Keenan has been off getting America pissed with his range of wines rather than pulling his finger out and making a record, the band’s fans have been whiling away the long, lonely, Tool-less hours making memes, and spectacularly sarcastic they are too. Here are 10 of the best…

Fans have long pored over the apocalyptic lyrics of Ænema to try and unravel its secrets, but maybe the “learn to swim” part really was just a public service offer for the aquatically challenged. Either way, we hope he’s got his verruca socks on.

This cartoonist reckons even Santa’s been defeated by the long, long wait. Maybe we need to leave out some mince pies and a large glass of Pinot Noir, and really, really believe they exist, before Tool will pop down the chimney to deposit some shiny new songs from out of their sack.

Little green men? Check. Flying saucers? Sure thing. Six-headed lizard people? Yessiree Bob, we met one down the pub just last week. But this Photoshop warrior reckons even Mulder and Scully would have trouble putting their faith in the existence of new Tool music.

Parodies of The Most Interesting Man In The World ads for Don Equis beer, starring American actor Jonathan Goldsmith, litter the internet like so many dog poo bags hanging on park hedges (seriously, why do people do that?). But with this meme quoting Tool’s Schism, one clever person has marked them out as the art-rock Good Will Hunting. We wonder how many complex equations went into thinking up those mental time signatures.

Yeah, come on guys, it’s not rocket science. The creator of this galactic smackdown is getting restless, and he’s not afraid to use cold, hard space-facts as undodgeable truth bullets. We imagine the crew of the International Space Station are having a good old weightless rofl to this one.

Summing up the existential angst of the scramble for gig tickets with one deadpan South Park shot. Damn your eyes, touts, damn your eyes to hell and back.

We like this one. While we’re all guilty of gnashing and wailing about the wait/price/impossibility of seeing the band, this one brave human comes out and reminds us all to stop being such massive babies about it.

Tim Allen’s 1990s sitcom Home Improvement, about an all-American handyman with his own TV show Tool Time, would have been funnier if it’d been Maynard and the boys wielding the spanners. Well, vastly weirder anyway, if guitarist and stop-motion genius Adam Jones here was allowed to direct as well as star.

This is one aggressive-looking succulent. What an aroused, spiky bastard. Luckily, Ænema is on hand once again to restore order to the world.

Yeah, we were all thinking it…