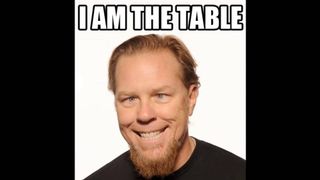 One of the many, many James Hetfield table memes

The singer and guitarist is the star of countless memes, with the most famous of them involving his “I am the table” lyric from the track The View, which featured on 2011 Lou Reed & Metallica album Lulu.

But while some might expect the memes to be an annoyance to Hetfield, he insists he finds them funny.

In the upcoming issue of Metal Hammer magazine, due out next week, Hetfield says: “It’s funny. I love it! I love that, I guess, there’s a certain look that becomes a representation of sarcasm, or humour, or idiocy.

“I love the fact that we’re recognised, and I got no control over it. What am I gonna do other than laugh at it and enjoy it?”

Lulu is much maligned by metal fans, but Metallica drummer Lars Ulrich recently said the band learned lessons from Reed that they took into the studio while recording their upcoming 10th album Hardwired… To Self-Destruct.

Ulrich said: “I think that it definitely just gave us a new way to interpret a creative process, or gave us an additional layer, that one can be that impulsive and one can also be happy that what happened in that minute. It has a beautiful element to it that’s just part of that minute.”

Meanwhile, Metallica have released live footage of them playing new track Atlas, Rise! live for the first time. It was recorded during their performance in Bogota, Columbia, this week – where fans passed around a giant crowdsurfing replica of the band’s …And Justice For All mascot Doris. View the live performance of Atlas, Rise! below.

Hardwired… To Self-Destruct is released on November 18.