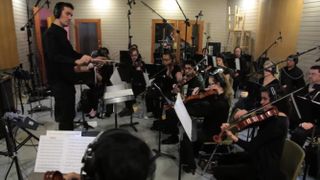 Tool’s Schism has been reimagined by a 40-piece orchestra.

The group known as Metamorphestra have released a video of their version of the track, originally released on Tool’s 2001 album Lateralus. It can be viewed below.

Metamorphestra have also launched a Kickstarter campaign to help fund the release of their album The Ship Of Theseus. The LA-based musicians behind the project previously released an album called Tantamount, from which the Tool cover is taken.

They say: “Metamorphestra is a brand new orchestra, founded in 2016 by Nick Proch. The group brings an oversized, high-energy, film score-esque approach to familiar songs.

“You’ve probably heard the originals on the radio, but you’ve never heard them played by a giant orchestra of LA’s finest session players, recorded and mixed in world-class recording studios.”

Their cover of Killing In The Name by Rage Against The Machine also appeared on Tantamount and a video for that track can also be viewed below.

Metamorphestra plan to cover System Of A Down’s Toxicity, Say It Ain’t So by Weezer, Stockholm Syndrome by Muse, Lady Gaga’s Perfect Illusion and Shake It Out by Florence And The Machine on The Ship Of Theseus.

The Ship Of Theseus is available to pre-order in a range of bundles.