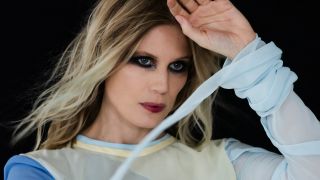 Myrkur, aka Amalie Bruun, has released a video for the new single Leaves Of Yggdrasil.

It’s the latest track taken from the upcoming Myrkur album Folkesange, which will launch on March 20 through Relapse Records. Myrkur shared the song Ella last month.

Bruun says: “Leaves Of Yggdrasil is a song very dear to my heart as I wrote it about being apart from the one you love because of circumstances that are completely out of your control.

“The Norns weave the fates of Gods and man and sometimes that means very tough life situations. I wanted to create a song with the feeling of an old folk-tale, but with words that resonated with my own life today.”

As for the neon-soaked promo for Leaves Of Yggdrasil, Bruun adds: “The video was created with Mats Ek with whom I also made the Ulvinde video.

“We both wished to create something entirely different from anything I've ever done, and take the visual universe to somewhere out of nature and more into the otherworldly.”

Myrkur have two live shows planned for later this year: At Sweden’s Gefle Metal Festival on July 9 and at the Brutal Assault Festival in the Czech Republic on August 5.

Myrkur: Folkesange
Myrkur, aka Amalie Bruun, returns with Folkesange – the follow-up to 2017's Mareridt. Unlike that album, the 2020 offering is said to relinquish “black metal for a refined yet far-reaching evocation of traditional folk."View Deal