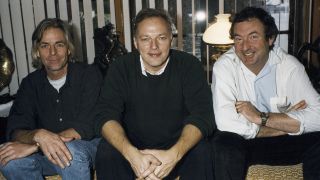 Last month, it was revealed that a box set celebrating Pink Floyd’s work from 1987 onwards would be released on November 29.

The 16-disc collection is titled Pink Floyd: The Later Years and will be spread across 5CD, 6 Blu-ray and 5DVD and brings together the band’s albums, along with live cuts and previously unreleased tracks.

An official lyric video for The Division Bell track Keep Talking has now been released and can be watched below.

Along with the albums, the box set will also include two 7-inch vinyl singles in new picture sleeves, featuring Arnold Layne performed live by Pink Floyd at the Syd Barrett Tribute concert in 2007, and Lost For Words from the Pulse tour rehearsals at Earl’s Court.

A 60-page hardback book of photos designed by Aubrey Powell of Hipgnosis and Peter Curzon of StormStudios will also feature, including many previously unseen images.

There will also be a set of newly-created set of reproduction tour programmes from Pink Floyd World Tour 1987/1988, Pink Floyd Live 1989, Pink Floyd European Tour 1994 – plus a new lyric book.

A collection of memorabilia including tour passes, stickers and posters, all printed to replicate the originals, and contained in a prestige card envelope, will also be in the collection.

Last week, drummer Nick Mason was crowned Prog God at the 2019 Progressive Music Awards and also announced he’d head out on tour across the UK and Ireland in 2020 with his Saucerful Of Secrets.

Pink Floyd: The Later Years
This 16-disc collection brings together Pink Floyd's work from 1987 onwards and will feature the band's studio albums, along with live cuts, previously unreleased tracks and more.View Deal