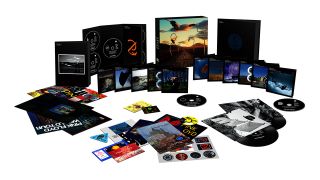 On November 29, a 16-disc collection featuring Pink Floyd’s work from 1987 onwards will be released through Pink Floyd Records.

Pink Floyd: The Later Years will be spread across 5CD, 6 Blu-ray and 5DVD and kicks off with 1987’s A Momentary Lapse Of Reason, which has been updated with extra Richard Wright keyboard parts and new drum tracks by Nick Mason, and has been remixed by David Gilmour and Andy Jackson.

Watch Pink Floyd play Wish You Were Here at Knebworth below.

The Blu-rays contain a wealth of material, including a surround sound, high resolution remix of A Momentary Lapse Of Reason, a 5.1 remix of The Division Bell, Unreleased Studio Recordings in 5.1 and a surround remix of Delicate Sound Of Thunder.

Along with the Knebworth concert, Pink Floyd’s show in Venice from July 15, 1989, is included, while there's also a 2019 restored and re-edited version of the live Pulse album.

There’s also music videos, bonus tracks from Delicate Sound Of Thunder, unearthed footage from the Pulse rehearsals, screen films from 1987 and 1994, Floyd’s induction into The Rock And Roll Hall Of Fame.

The final Blu-ray contains Ian Emes’ The Endless River film, Pink Floyd’s last live performance at the 2007 Syd Barrett Tribute Concert, the cover shoot from A Momentary Lapse Of Reason, behind the scenes footage from The Division Bell tour and film from The Endless River launch event in 2014.

Find a full list of contents below, while the tracklists for all discs can be found on the official Pink Floyd website.

A CD and 2LP highlights package will also be released on November 29.

Pink Floyd: The Later Years is available to pre-order now from Amazon.

DVD: Five DVDs duplicating the content of Blu-rays 2-6 above, each contained in a gatefold wallet with dedicated cover art, including tracklists and publishing credits.

A collection of memorabilia including tour passes, stickers and posters, all printed to replicate the originals, and contained in a prestige card envelope.